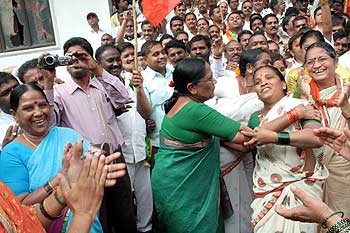 Image: Telangana supporters celebrate in Hyderabad on Thursday
Photographs: SnapsIndia
Gorkhaland supporters called for a bandh in Darjeeling for their own state, while Rashtriya Lok Dal leader Ajit Singh threatened to resume the agitation for a separate Harit Pradesh, as the planned statehood for Telangana sparked fresh demands to create new states.

With the Centre agreeing to carve out Telangana from Andhra Pradesh, the decision is expected to be tested in the backdrop of demands for at least seven other new states besides Gorkhaland in West Bengal and Harit Pradesh or Kisan Pradesh to be carved out from western Uttar Pradesh.

Telangana will be the 29th state in the Indian Union as and when it is created. There have been muted calls for creating Mithilanchal in Bihar, Coorg in Karnataka and Saurashtra in Gujarat.

Ajit Singh said people by and large have accepted the need for Harit Pradesh. "Rahul Gandhi also said he is in favour of a separate Bundelkhand (carved out of Madhya Pradesh and Uttar Pradesh). So it is a question now when the government moves. But if the government does not move, we will start our agitation again."

'Gorkhaland is a 102-year-old demand' 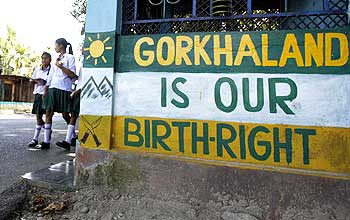 Image: Schoolgirls walk past a graffiti demanding statehood for Gorkhaland at Sukuna in Darjeeling
Photographs: Rupak De Chowdhuri / Reuters
"Since Telangana has been approved by the Centre on the lines of the Gorkhaland statehood demand, our demand for a separate state carved out from West Bengal should also be conceded by the Centre," Gorkha Janamukti Morcha General Secretary Roshan Giri told PTI from Darjeeling.

"Ours is a 102-year-old demand. We should be given justice and we have called a three-day bandh from December 14 in Darjeeling to press for it," Giri, who left for Delhi at the head of a four-member GJM team to take up the issue, said.

The demand for creation of the Bundelkhand state, comprising districts of Banda, Chitrakoot, Jhansi, Lalitpur, Sagar of UP and MP have been pending for a long time with the home ministry, an official said.

Though no state government has given any recommendation, which is mandatory for carving out a new state, the demands continue to pour in. A demand for creation of Bhojpur state comprising areas of eastern Uttar Pradesh and Bihar has also been received by the ministry. 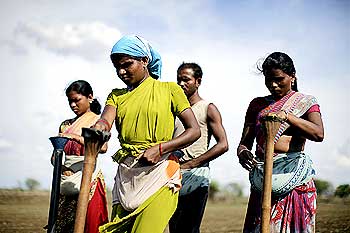 Image: A family works in a field sowing soy beans at a village in Wardha distrcit of Vidarbha region in Maharashtra
Photographs: Jorge Silva / Reuters
Another demand for creation of a new state comprising Saurashtra region of Gujarat, one of the most prosperous states in the country, has also been pending with the ministry for several years now.

The Centre has received representations for creation of Harit Pradesh or Kisan Pradesh consisting several districts of western Uttar Pradesh, the official said.

Favouring small states like Telangana, Vidarbha, Bundelkhand and a Harit Pradesh, Ajit Singh recently said, "Uttar Pradesh is ungovernable. We will also start our agitation for re-organisation of the state. We had stopped it for some time as the Telangana issue had come up."

The home ministry has also received demands for creation of Mithilanchal or Mithila state, comprising districts of northern Bihar, a new Greater Cooch Behar state out of parts of West Bengal and Assam, a Vidarbha state in Maharashtra and a state for the Coorg region of Karnataka.