'It was freedom at midnight' 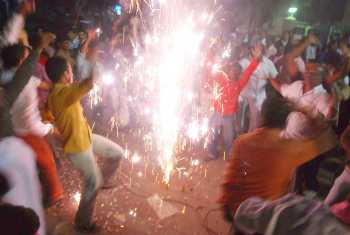 Image: TRS supportrs burst crackers after the Centre gave the nod for a separate state

At the stroke of midnight, the Telangana movement woke up to a new dawn. Mohammed Siddhique was there in Hyderabad to witness what many people in the region call a historic moment.

As an over-enthusiastic activist put it, it was "freedom at midnight" for the Telangana supporters. The entire region burst in to unprecedented celebrations at midnight after the Centre gave the nod for a separate state.

Soon after Union Home Minister P Chidambaram made the announcement, the people, especially the youth, rushed out to the streets to witness history in the making.

The beating of drums, bursting of crackers, the youth brigades rushing on motor cycles with the pink color flags of the TRS in their hands -- the night had all the making of an historic event.

There were reports of similar celebrations in all the other nine districts of Telangana Adilabad, Nizamabad, Karimnagar, Warangal, Medak, Mehbubnagar, Nalgonda and Khammam. 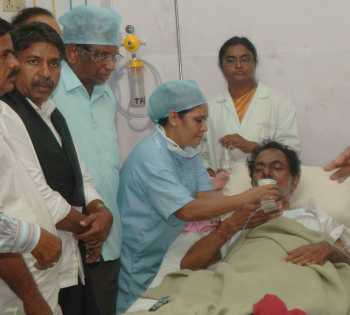 Thousands gathered at the Nizam's Institute of Medical Sciences in Hyderabad where K Chandrasekhara Rao had been on a fast for the last 11 days. The place was echoed with slogans of "Long Live KCR" and "Jai Telangana".

Manda Krishna Madiga, the popular leader of a Dalit organization Madiga Reservation Porata Samiti summed it up, "Like India got their Independence on the midnight of August 15, 1947, the people of Telangana have achieved their Independence at midnight. We are feeling as proud today as all the Indians had felt on that midnight," he said.

Similar boisterous scenes were witnessed at the sprawling complex of Osmania University in Hyderabad and Kakatiya University in Warangal where thousands of students celebrated the victory throughout the night.

The Joint Action Committee of students, which decided to storm the Assembly on Thursday to press its demand for passing Telangana resolution, has now renamed the event as "Victory March" to be held on Thursday noon.

The police and the paramilitary forces deployed over the last two days to protect the Assembly were nowhere to be scene.

Many people said this "freedom" will mean self-respect and good employment opportunities to all of them.

There were Hindus, Muslims, Sikhs and Christians in the gathering at the NIMS hoping to have a glimpse of their leader. 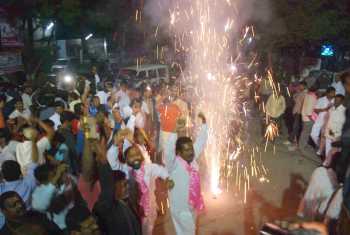 Image: Another picture of victory celebrations

"This is a good news for all of us," said a young man, dancing to the tunes of a popular film song.

Some praised the Congress for the feat. "Thank you Soniaji, Thank you Chidambaramji. But please keep your promise and make Telangana a reality," said a young IT professional.

On the sudden surge of hopes and aspirations among the Telangana youth, Prof Kondanda Reddy, head of Telangana Intellectual Forum said, "That will be the biggest challenge before the leadership. But thankfully we have been discussing these issues for the last 15 years and we have a roadmap ready to meet some of these demands.