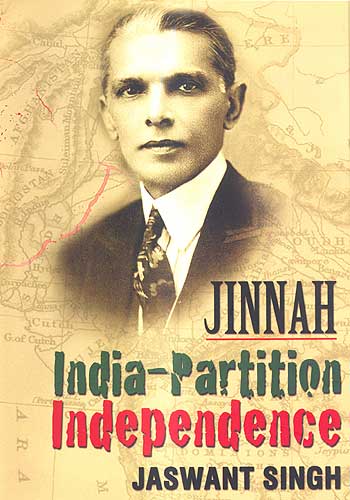 'Jinnah was a great man,' says former external affairs minister and senior Bharatiya Janata Party leader Jaswant Singh. In his new book, 'Jinnah: India-Partition-Independence,' Singh questions Jinnah's demonisation for being the villain of Partition and refutes the charge that he was anti-Hindu. He paid for that frank assessment by being expelled from his party on Wednesday.

Syed Firdaus Ashraf looks at M A Jinnah, one of Indian history's most controversial and enigmatic figures.

Where was Jinnah born?

Did he study in a 'madarssa'?

No, his parents enrolled him at the Christian Mission High School, Lawrence Road, Karachi.

What was his nickname?

He was called Mamad at home, was short for Mohammad Ali. He anglicised his name to M A Jinnah and dropped Mohammad Ali from his name.

Was that the only other name he had?

What were the name of his parents?

Is it true Jinnah's grandfather was a Hindu?

Yes, his name was Poonjahbhai and he converted to Shi'ite Islam, became a Khoja, the Ismaili sect of which the Aga Khan is the spiritual head. Later, Jinnah dissociated himself from the Khoja sect and became an Isna'asheri.

Twice. At 16, he married Emibai, who was 14. Soon after his marriage, he left for London. He never saw her again; Emibai died while he was studying in London.

He later married Rattanbai (Ruttie) Petit, daughter of the wellknown Bombay figure Sir Dinshaw Petit. Jinnah was 42 and she was 18. They have a daughter Dina Wadia, whose son Nusli is the chairman of the Bombay Dyeing group.

Was he a strict follower of Islam?

No way! According to his biographer Stanley Wolpert, Jinnah ate pork and drank alcohol which is forbidden in Islam.

Did he have any Hindu friends?

Buy the book at the Rediff Bookshop.

More an opportunist than secular or communal 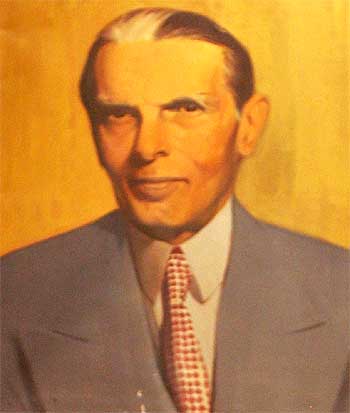 Image: A portrait of Jinnah, the founder of Pakistan
Photographs: Mian Khursheed/Reuters
So why did Jinnah turn communal and go on to create Pakistan?

He did so because he felt sidelined in the Congress party. One of Bombay's most distinguished lawyers, he did not agree with Mahatma Gandhi's views and left the Congress party to settle down in London in 1930.

How then did he make a comeback to politics?

He was not interested in returning to India but Muslim League leader Liaquat Ali Khan and his wife Rana persuaded him to join the Muslim League. The Muslim League was in bad shape and had no charismatic leader to guide the party.

Liaquat Ali Khan went on to become Pakistan's first prime minister. Jinnah was finally persuaded to return to India in 1934.

What happened to his secular politics after he joined the Muslim League?

Jinnah did not pursue a hardcore communal agenda after he returned from London to join the Muslim League. In 1937, when provincial elections were held in undivided India under British rule, the Muslim League lost badly.

The Unionist Party won Punjab state, the North West Frontier Province was won by the Congress Party while Sindh was won by Allah Baksh's Independent party.

This election rout led Jinnah to realise that if the Muslim league had to survive it had to adopt communal policies. Of course, his supporters always feel the policies of the Congress provincial government like banning cow slaughter and giving Hindi importance over Urdu made Jinnah take that communal route.

Does it mean he demanded a separate state of Pakistan right after the 1937 defeat?

The word 'Pakistan' was first coined by Chaudhary Rahmat Ali in the early 1930s. It means the land of the pure. Ali had envisioned a Muslim state within Indian territory. One of its supporters later was the legendary poet Mohammad Iqbal, who had written the immortal 'Saare Jahan Se Accha Yeh Hindustan Hamara.'

No way! When the Muslim League was formed in 1906, Jinnah refused to join the party. He said he was an Indian first and then a Muslim.

That means he was secular in his outlook.

It could be said he was more an opportunist than secular or communal. He knew how to play his cards well for maximum gain. When he was gaining popularity as a secular leader, he had no problems about secularism.

However, when he lost his sheen to Mahatma Gandhi's politics he turned communal.

Post 1940, he turned a vociferous supporter of Pakistan and never looked back.

Jinnah lived in Bombay for 51 years 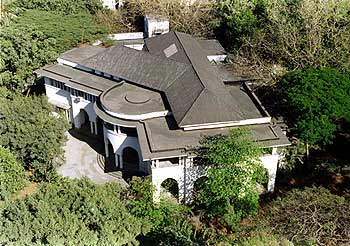 Image: The Jinnah House in Mumbai.
Photographs: Reuters
So when did Jinnah start demanding Pakistan?

On March 23, 1940, Jinnah and the Muslim League openly demanded a Muslim state of Pakistan for the first time. At the All India Muslim League annual conference in Lahore, Jinnah famously said:

'Hindus and the Muslims belong to two different religions, philosophies, social customs and literature. They neither inter-marry nor inter-dine and, indeed, they belong to two different civiliSations that are based mainly on conflicting ideas and conceptions. Their concepts on life and of life are different. It is quite clear that Hindus and Muslims derive their inspiration from different sources of history. They have different epics, different heroes and different episodes. Very often the hero of one is a foe of the other, and likewise, their victories and defeats overlap. To yoke together two such nations under a single state, one as a numerical minority and the other as a majority, must lead to growing discontent and final destruction of any fabric that may be so built up for the government of such a state.'

So did he remain communal till his death in 1948?

According to his biographer Stanley Wolpert, Jinnah in one of his speeches in Karachi after Independence shocked many people by preaching secularism: 'You are free to go to your temples, mosques or any other place of worship in this state of Pakistan. You may belong to any religion, caste or creed that has nothing to do with the business of the state. We are starting in the days when there is no discrimination, no distinction between one community and another. We are starting with the fundamental principle that we are all citizens and equal citizens of one state.'

Many right-wing Pakistani historians deny this speech and declare he never uttered those words.

What was his message to the Muslims of India who stayed behind after Partition?

Maulana Abul Kalam Azad writes in his book 'India Wins Freedom' that Jinnah's parting message before leaving for Karachi was that since India and Pakistan were two countries, Indian Muslims should be loyal citizens of India. Many Muslim League supporters, who were left behind in India, felt deceived and left in the lurch.

When did Jinnah die?

He died on December 25, 1948. He had been diagnosed with TB a couple of years before, but few beyond his family knew about this. Had it been known that he was seriously ill, some historians believe that Partition could have been averted.

Who are his descendants?

His only child, his daughter Dina, married Neville Wadia, a Parsi, owner of the Bombay Dyeing companies. Jinnah never spoke to her again after the marriage. Ironically, his father-in-law Sir Dinshaw Petit had broken off relations with his daughter Ruttie after she married Jinnah.

Jinnah wanted Dina to marry a Muslim, but she did not relent. She told Jinnah that he himself had married a Parsi to which Jinnah said her mother (Ruttie) had converted to Islam.

Jinnah never spoke of his daughter among friends and whenever he addressed her, he always called her Mrs Wadia.

Dina Wadia is 90 and lives in New York. When she visits Mumbai she reportedly stays at a hotel in central Mumbai and dines with her son every evening. A few years ago, Dinal and Nusli Wadia visited Pakistan for the India-Pakistan cricket series, where they were honoured by then president Pervez Musharraf.

In 2007, Dina Wadia claimed her rights to her father's bungalow, Jinnah House, in Mumbai's posh Malabar Hill area, which is at present with the ministry of external affairs.

Her father had built the bungalow after he returned from London in 1934, demolishing his earlier home on the same property. Most people would be surprised to know that M A Jinnah lived in Bombay for 51 years, from 1896 to 1947. Most of his life was spent in the city where he built his formidable legal reputation.