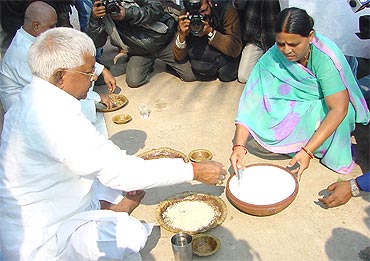 Contrary to repots about former Bihar chief minister Rabri Devi giving up politics, the wife of Rashtriya Janata Dal supremo Lalu Prasad has decided to contest the state assembly elections from not one but two constituencies -- Raghopur and Sonepur.

Putting an end to all speculations, Lalu Prasad announced at a press meet in Patna, "Rabri Devi will contest from two assembly seats. She is not retiring from active politics." Rabri Devi has traditionally represented Raghopur in Vaishali district during earlier assembly elections.

Sonpur in Chapra district is considered to be the stronghold of Lalu Prasad. He is currently the member of Parliament from Chapra.

Two months ago, it was widely reported that Rabri Devi may bid adieu to active politics after her husband Lalu Prasad declared himself the RJD's chief ministerial candidate for the assembly polls.

Sources in RJD had said that Rabri Devi was not projected as a contender for the CM's post, as she would be no match for engineer-turned-politician Nitish Kumar, who is widely perceived as a politician with vision and acumen.

In 1997, Rabri Devi became the chief minister of Bihar after Lalu Prasad was forced to step down from the post following corruption charges in the multi-crore fodder scam. Opposition leaders have often alleged that Lalu Prasad continued to rule the state with his wife in the CM's chair.

Rabri Devi, despite being the leader of Opposition, has also disassociated herself from active politics in the last few months.

Politicians who should have shut up