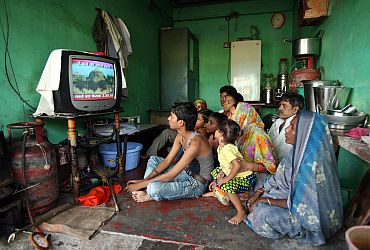 Image: A family watches a TV news channel in a room in Ayodhya on Thursday
Photographs: Mukesh Gupta/Reuters

The nation heaved a sigh of relief on Thursday with tempered responses to the Allahabad high court verdict on the Ayodhya title suits and no untoward incident being reported.

Apprehensions about the situation turning volatile after the verdict were proved wrong with political parties welcoming the verdict and those aggrieved saying they would appeal in the Supreme Court.

Setting the tone, Prime Minister Manmohan Singh appealed to the people to maintain peace and harmony and cautioned them against disruptive elements spreading rumours to create ill-will between communities.

Security was ramped up across the country and authorities carried out preventive detentions to avert trouble.

Nation heaves a sigh of relief 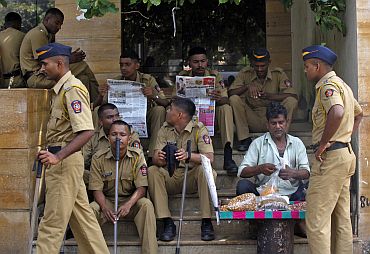 Image: Policemen keep a watch outside a residential colony in Mumbai on Thursday
Photographs: Danish Siddiqui/Reuters

In Uttar Pradesh, an alert was sounded across the state with Chief Minister Mayawati directing administrative and police officers in all districts to remain vigilant.

Twenty companies of Central Reserve Police Force were deployed for the inner security of the Ram Janmbhoomi complex, besides 38 other companies of police and PAC for the twin towns and 16 other companies for the rural areas, a senior police official said.

Additional companies of CRPF were deployed in and around the Lucknow bench of the Allahabad high court.

Although Uttar Pradesh Chief Minister Mayawati alleged that the Central government did not offer proper security to the state.

She also said that in case of any land and order problem the Central government would be responsible for the matter. 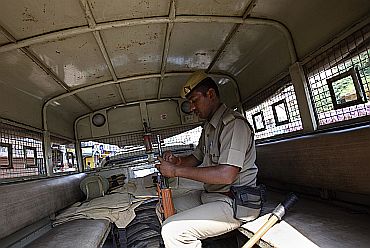 Image: A policeman checks his gun as he sits inside a police vehicle in Lucknow on Thursday
Photographs: Adnan Abidi/Reuters

The Bharatiya Janata Party said that the Ayodhya verdict has opened 'a new chapter for national integration' and 'a new era of inter-community relations.'

Reading out a statement before the reporters on behalf of the BJP after convening a meeting of the party's core group at his residence in Delhi after the court's verdict, senior leader Lal Krishna Advani said, "In so far as the judgment upholds the right of the Hindus to construct a temple, it is a significant step forward toward the construction of a grand temple of the birthplace of Lord Ram."

Many state chief ministers, like Chhattisgarh CM Raman Singh and Maharashtra CM Ashok Chavan, welcomed the verdict and noted that the reactions should be restrained, and peace and harmony must be maintained.

Some chose the legal the way to oppose 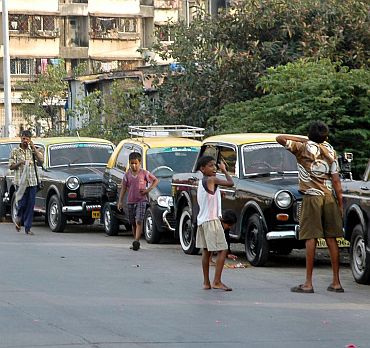 Image: Children play on a deserted street beside a line of stranded taxis in Mumbai on Thursday
Photographs: Sahil Salve

On the other hand, expressing its dissatisfaction with Ayodhya verdict, as pronounced, the Sunni Waqf Board has decided to appeal in the Supreme Court against verdict delivered on Thursday.

The Waqf board, one of the main litigants, on Thursday said it didn't agree with today's decision.

Meanwhile, on Wednesday, helicopters with powerful searchlights were pressed into service to tighten security in Ayodhya.  The authorities also ensured that Ayodhya was completely sealed within seconds if any untoward incident breaks out in any part of the country and has the possibility of spilling over to Uttar Pradesh. 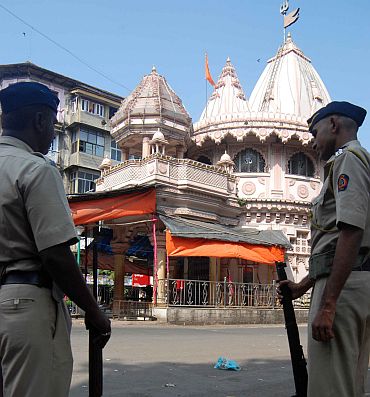 Image: Policemen stand guard in front of a temple in Mumbai on Thursday
Photographs: Sahil Salve

On the ground, the authorities put up barricades at every road coming into Ayodhya and Faizabad. Vehicles were allowed to pass after a thorough search at every barricade.

As per the Lucknow bench's verdict, the ownership of the disputed land has been divided as follows: (1) Ram Lala, the birthplace of Lord Ram, given to Ram Lalla Virajman (2) Sita Rasoi and Ram Chabootra to Nirmohi Akhara and (3) The remaining part to be given to the Sunni Waqf Board.The Lucknow Bench of the Allahabad High Court comprised of Justices D V Sharma, Sudhir Agarwal and S U Khan.