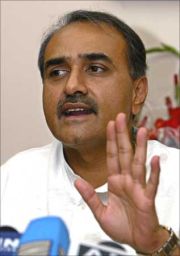 "Please crucify me if I am guilty. What have I done wrong?" said Praful Patel, minister of civil aviation, reacting to the criticism he has been facing in the country after the Dubai-Mangalore flight crashed on Saturday.

The tragic air crash, which killed 158 people, is a blot on Patel's major-accident-free career graph.

The minister was in New Delhi when he was informed about the air crash.

He said he immediately supervised the rescue operation, coordinated with the Karnataka state government and ensured that the airport police, state police, fire brigade and other agencies had reached the site.

By 9.30 am, Patel was in Mangalore to visit the crash site, to meet the survivors and the victims' relatives.

Talking exclusively to rediff.com, Patel said, "I have personally nurtured the Dubai-Mangalore sector. I have ensured facilities in Mangalore. I am feeling emotionally drenched today to go through this tragedy. I am personally very disturbed today. It is a great sense of loss. I am very, very upset."

He added, "My tenure has been incident-free and this event has shocked me. I really regret that lives have been lost."

When asked what might have gone wrong, Patel said, "Let the inquiry get over, I would not like to speculate."

In reply to a question about allegations regarding Air India's deteriorating safety standards, Patel said, "I can tell you today that prima facie it seems that the system didn't fail. Nobody is at fault, but you see human error can happen."

He hastened to add, "I am not saying there was a human error, but it can happen."

But what could have gone wrong, if it was not the fault of the pilot?

Patel said, "Apparently, everything else was okay. Weather was fine. Wind was calm. Runway was dry. Landing instructions were there. The aircraft instrument landing system was perfectly all right.

"The pilot was told to touch down four miles ahead of the runway. The (Mangalore) runway is almost new -- built in 2006. The aircraft was quite new. The technical history of the aircraft is clear. Nothing wrong has been recorded so far. The pilot was not at all new. He had landed in Mangalore 19 times so far. He was flying with Jet Airways before joining us. He knew the geography (of the runway) and the place.

"His co-pilot lives in Mangalore. They knew the area well. Moreover, the runway is normally 7,500 feet but this one is 8,000 feet long. We don't know yet what exactly went wrong. But, humans can make errors, no?"

He added: "In case the pilot had landed ahead of his spot, he had the option of flying back again and retry safe-landing. But that was the call he had to make. What can I say at this stage? Nothing is an issue now! It crashed There is no alternative but regret at this stage."

Patel dismissed criticism that the pilot was a foreigner.

"Many people are criticising the fact that he was a foreigner. It's not an issue here. He was human. Any human being, foreigner or Indian, can make an error."

He repeatedly said it was unfair to say that Air India was accident-prone.

"If any deficiency is there in the system, we will ensure that it's fixed. Let them do a thorough inquiry."

"I offered to resign because I am emotionally upset today. The PM heard me patiently. He was considerate towards me. He told me, 'We have to face the situation. What is your fault?'". Dr Singh rejected Patel's offer to resign.

Patel said with a hint of dejection in his voice, "You know, I believe deeply in God. But today, I had no time to think of anything else but the rescue operation. At the end of the day, it struck me that after all, the world belongs to man and machines are just a part of it. The world and machines are run by humans and we humans can make errors."
Sheela Bhatt in New Delhi
Related News: Praful Patel, Mangalore, Air India, Dubai-Mangalore, Dr Singh
SHARE THIS STORY
Print this article