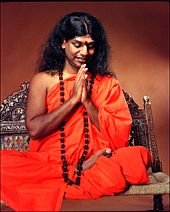 Self-styled godman Nityananda Swami, who was caught in sleazy video footage, on Saturday said the video was morphed and manipulated to misrepresent his personal life but did not deny his images with actress Ranjita in the film.

He said the girl in the video was his devotee and she was taking care of him when he was ill.

He said he became sick last December, when the actress volunteered and served him. He was physically unwell and was "consciously in a deep samadhi", he said.

Swami, who has been slapped with cases of cheating after the video footage came to light on March eight, said the video will be sent to experts to find out the portions morphed in it.

He said the video has been misrepresented by an onlooker.

Another case filed against Nityananda