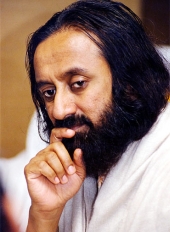 The Bangalore police on Saturday claimed to have solved the mysterious attack on spiritual leader Sri Sri Ravi Shankar.

On May 30, it was reported that an unidentified gunman had fired at the convoy of the spiritual leader while he was on his way to attend a programme near his ashram. One of his devotes had been injured in the incident.

The police claimed that one Dr Mahadev Prasad fired the bullet to chase away a stray dog.

Dr Mahadev Prasad, chairman of the Dr B R Ambedkar Medical College, owns a farm house 2,000 feet away from Sri Sri's ashram. He fired three rounds of bullets to chase away a stray dog, and one of the bullets landed at the ashram, said the police.

The police, who had retrieved the bullet at the site, tracked it back to Prasad.

Prasad has a licensed firearm, said the police, adding that he hadn't reported the incident fearing the repercussions.

I have no enemies: Sri Sri Ravishankar