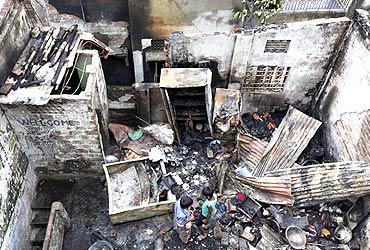 At least 109 people were burnt alive and 50 others were critically injured when a deadly fire engulfed a cluster of multi-storey buildings in a densely populated area of Dhaka late on Thursday night.

The chief doctor of the burn unit of the facility Samanta Lal Sen, however, said the total count could not yet be done as several other injured victims had been taken to other facilities. He said 41 people were still being treated at the hospital's unit alone, mostly with 'very critical burn injuries'.

The private ATN Bangla and other TV channels covering the disaster said the fire brigade rescuers halted their drive on Friday after a night-long search for bodies and people trapped inside the wrecks. But local residents said more bodies could still be trapped inside the several multi-storey buildings and shanties at Kayetuli area of the crowded old Dhaka.

"It appears hell has come down here. We see the rescuers retrieving burnt bodies one after another from the ruptured structures using search lights for want of electricity," a journalist at the spot said.

The blaze was apparently sparked by an explosion of an electric transformer at approximately 10 pm on Thursday night. The fire quickly engulfed a small plastic factory and four other multi-storey buildings and adjacent shops, sending the flames some 300 feet height in the sky, a fire brigade official said.

"In my 40 years of career, I never saw such a disaster, So many people came simultaneously with burn injuries," head of DMCH's burn unit said, as many people rushed from one ward to another, looking for their relatives and friends. Television footage showed hundreds of people awaiting news on their loved ones and many wailing at the wreck. The footages showed people, including women and children, running around looking for relatives.

Prime Minister Sheikh Hasina expressed her deep shock at the deaths and prayed for the early recovery of the injured as Bangladesh declared a countrywide mourning on Saturday. Hasina announced that the government will bear the cost of the treatment of the injured people as she visited the state-run hospital to see the victims.

The government will take the requisite steps for the rehabilitation of the people affected by the devastating fire, said a spokesperson.

Sheikh Hasina also cancelled all her scheduled programmes for the day in view of the tragedy.

Army medical teams were also deployed to treat the injured. Witnesses said the fire had wiped out entire families and in many cases left lone survivors.

A nurse at the entrance of the DMCH morgue was seen weeping in front of the body of a six-year old boy. Some survivors said many people were burnt alive as they tried to rescue their family members from the inferno.

The reports said most of the injured were rushed to the DMCH hospital in ambulances, rickshaws and vans. Others were rushed to nearby Salimullah Medical College Hospital which hurriedly set up a makeshift burn unit to treat the injured. Fire service chief Brigadier General Abu Nayeem Mohammed Shahidullah told newsmen after midnight that the fire was under control. Rescue operations continued as authorities feared that more bodies and injured people could be trapped inside the wrecks.

Main opposition Bangladesh Nationalist Party chief and ex-premier Khaleda Zia also visited the scene. The home ministry has formed a three-member committee, headed by the additional secretary, which includes representatives from the police and fire department. The committee has been asked to submit its report in seven days.

Image: A building damaged by the fire in Old Dhaka | Photograph: Andrew Biraj/Reuters

Dravid in hospital after fracturing jaw