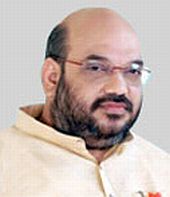 "As I landed in New Delhi, I have information that Amit Shah's resignation has reached my residence in Gandhinagar. On return, I will accept it and complete the formalities," Modi, who is in the national capital to attend the National Development Council meeting, said.

Asked by media persons whether the resignation amounted to accepting that Shah was guilty, Modi said, "He was accepting it because under the Constitution, certain formalities have to be fulfilled".

He said Shah would fight the issue legally and expressed confidence that judiciary would provide him justice.

Shah's resignation comes a day after CBI charged him with kidnapping and murder of alleged gangster Sohrabuddin Sheikh and his wife Kauser Bi in November 2005.

The CBI chargesheeted Shah for criminal conspiracy, kidnapping, murder, extortion, destroying of evidence, tampering with evidence and threatening and influencing witnesses. And a CBI special court refused his anticipatory bail.

Along with Shah and two associates, four senior police officers and eight middle-ranking officers have also been chargesheeted by the CBI.

It transpires that Shah brought to bear pressure on some of the officers to suspend the inquiry and also took away the papers under the guise of scrutiny. It is learnt that Amit Shah directed G C Raigar, additional director general of police, CID (crime & railways) to provide him with the list of witnesses, both police and private, who are yet to be contacted by the CID (crime) for recording their statement in the said enquiry. Such directions from the minister of state for home go beyond the scope of his office.

It was reliably learnt by the investigation agencies that the minister, in the course of conversation with the senior officers, had admitted in cavalier manner that Kausarbi had been killed as well.

Even though Shah has resigned, his whereabouts are still unknown.

The the CBI, which filed the chargesheet on Friday before a court in Ahmedabad, has already sent teams for arresting him after he refused to appear before an agency team by
Friday's 1 pm deadline for questioning.

Shah's anticipatory bail application before the CBI court was rejected on Friday and his lawyers were planning to approach the Gujarat High Court.

CBI also sent teams to the office and residences of the senior BJP leader in Gandhinagar and Ahmedabad and recorded statements of Shah's staff but could not locate him.

Attacking the Congress, Modi said, "The case against Shah was a revenge for its loss in the 2 007 Assembly polls when it had made Sohrabuddin a hero. This was a politically motivated action against Amit Shah and the BJP government in Gujarat to corner it and to put obstacles in development work it was carrying out".

He said, "Shah is completely innocent and the charges against him are fabricated. The CBI is being misused by the Congress against its political rival".

He said the BJP would go to the people along with those fighting the forces of terror.

Modi said the Congress and Central government had completely "failed" in all fronts in facing the challenges of Kashmir, Maoists and problems from Pakistan.

"The Congress government at the Centre was fully using the CBI to target political rivals after it failed on all fronts," Modi said.

He said, "The government failed on the prices issue and was faced with an unprecedented bandh. Srinagar is on fire and the government came back fully beaten at the Indo-Pak dialogue in Islamabad and the Maoists were replying by bullets in the fight in which innocent people were killed".

The probe agency tightened the noose around Shah, who has been named as an accused along with 14 others including some IPS officers in the chargesheet filed on Friday in the
special CBI court.

Shah has been listed as accused number 13 and the chargesheet notes he has not been arrested.

A CBI statement said the 15 accused were booked in the fake encounter of Sohrabuddin and for brutally killing his wife Kausarbi. The CBI probe was spread over five states --Gujarat, Rajasthan, Madhya Pradesh, Andhra Pradesh and Maharashtra.

About the summons to Shah, the statement said, "He did not appear and hence chargesheet was filed without his examination."

Besides the murder charge, the other charges against all the 15 accused included criminal conspiracy, wrongful confinement, kidnapping and abducting to murder, extortion and destruction of evidence under various IPC sections.

The CBI is conducting a fresh probe into the November 26, 2005 encounter at the behest of the Supreme Court after the Gujarat police raised questions on the investigations. Gujarat Police killed sheikh, an alleged gangster, in an alleged fake encounter.

The accused included IPS officers Abhay Chudasama, D B Vanzara, Dinesh M N and Rajkumar Pandian and eight other policemen. All of them are under arrest.

"Yes, we have sent teams," CBI sources said but avoided a direct reply when asked whether teams have been sent to arrest Shah.

'Designs of CBI will be exposed'

The Bharatiya Janata Party is standing behind Shah, saying that the "mischievous designs of the CBI" will be exposed in court.

"We have always had the highest regard for our judicial system and always cooperate with law, so there will be a legal fight in the court," BJP spokesperson Prakash Javadekar said.

He maintained that though Shah has resigned, the party was fully with him and will be raising its voice against "abuse of CBI for political purposes."

"He will fight against the mischievous designs of CBI in the court and the truth will be upheld," Javadekar said.

'This case is a turning point for Modi'