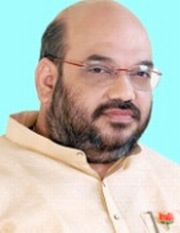 In a big blow to the BJP government in Gujarat, junior Home Minister Amit Shah, a close aide of Narendra Modi, was charged with murder by the Central Bureau of Investigation in the Sohrabuddin Sheikh fake encounter case  on Friday and may face arrest after he was denied anticipatory bail.

Shah, who has not been seen in public for several days and skipped Cabinet meetings and office, also failed to appear before the CBI earlier in the day for questioning for the second time in two days following summons issued twice, the deadline for which expired at 1 pm.

Shah's anticipatory bail plea shortly after he failed to show up before the CBI was rejected by special CBI court judge G K Upadhaya, heightening the possibility of his arrest.

The CBI also sent teams to the office and residences of the senior BJP leader in Gandhinagar and Ahmedabad and recorded statements of Shah's staff but could not locate him.

The probe agency tightened the noose around Shah, who has been named as an accused along with 14 others including some IPS officers in the chargesheet filed on Friday in the special CBI court, on a day of fast paced developments.

Shah has been listed as accused number 13 and the chargesheet notes he has not been arrested.

"The chargsheet has been filed under IPC Sections 120-B(conspiracy) read with 342 (wrongful confinement), 364 (kidnapping and abducting to murder), 365 (kidnapping or abducting with intent secretly and wrongfully to confine a person) and 368 (keeping in confinement kidnapped or abducted person). The other Sections are 384 (extortion), 302 (murder) and 201 (causing disappearance of valuable evidence of offence or giving false information to screen offenders) in the fake encounter of Sohrabbuddin and brutally killing of his wife, CBI spokesperson Harsh Bhal said in a statement.

The statement said the 15 accused were booked in the fake encounter of Sohrabuddin and for brutually killing his wife Kausarbi. The CBI probe was spread over five states --Gujarat, Rajasthan, Madhya Pradesh, Andhra Pradesh and Maharashtra.

About the summons to Shah, the statement said, "He did not appear and hence chargesheet was filed without his examination."

Besides the murder charge, the other charges against all the 15 accused included criminal conspiracy, wrongful confinement, kidnapping and abducting to murder, extortion and destruction of evidence under various IPC sections.

The accused included IPS officers Abhay Chudasama, D B Vanzara, Dinesh M N and Rajkumar Pandian and eight other policemen. All of them are under arrest.

"Yes, we have sent teams," CBI sources said but avoided a direct reply when asked whether teams have been sent to arrest Shah.

In an attempt to avoid being questioned face to face by CBI officials, Shah earlier in the day sought more time to appear before the probe agency and sent his lawyer to its office here but his plea was turned down by it.

Shah's lawyer Mitish Amin said a request was made to the agency to request for more time and consider the option of handing a questionnaire to the Minister to respond to their questions.

However, CBI has turned down the request to give a questionnaire, Amin said.

"They do not think that they need to give a questionnaire to us," Amin told reporters after coming out of CBI office.

Earlier, before going inside the CBI office, Amin had said, "The way he (Shah) has got the summons and he was asked to come for deposition, we feel that the time was too short".

"We will ask the CBI to give the questionnaire as the incident is very old," he said.

"We are willing to cooperate but the time given to Shah was less. The way he has got the summons and was asked to come for deposition, we feel that the time was too less," Amin said.

Summons to Modi's confidant puts Gujarat government in a spot