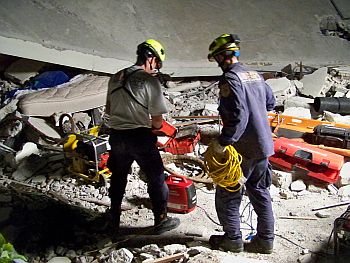 The Obama Administration has praised Indian American Rajiv Shah for extraordinary leadership qualities shown by him in the rescue and recovery efforts in earthquake-hit Haiti; where tens of thousands of people have been reported dead.

As Administrator of the USAID, Shah is the highest-ranking Indian American in any US presidential administration and is leading the massive US efforts in rescue and recovery efforts in Haiti.

"I think it has been a tremendously positive effect. Secretary of the State Hillary Clinton is thrilled that Raj Shah is on board," Assistant Secretary of State for Public Affairs, P J Crowley, told media persons at the daily State Department news conference on Tuesday.

"Thankfully, he was on board when this tragedy took place. And he has energised USAID," Crowley said in response to a question.

"He has led them ably over the past week as the senior US official designated by President Obama. He has a familiarity with Haiti. But every day, Raj has been pushing to try to do as much as possible for the benefit of our citizens and Haitian citizens. So the Secretary is enormously grateful that we were able to have Raj in place before this started," Crowley said.

The massive rescue and recovery effort being carried out by the United States in Haiti, Crowley said has been an extraordinary effort over the past week led by Shah.

"He has the background and deep understanding of the region to effectively lead the US' response to the devastating earthquake in Haiti," Bill Clinton, the former US President, who serves as the UN special envoy to Haiti was quoted as saying by The Washington Post last week.

"I know he's going to do a good job and make a real difference for the people of Haiti during their time of great need," Clinton said.

McDonough has worked closely with Shah since last week when the earthquake struck. "Focused. Calm. Facts-based," he said about Shah.