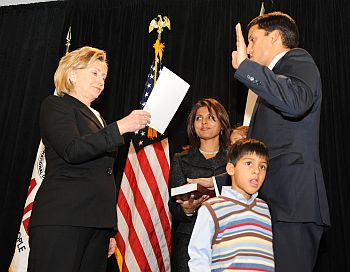 Rajiv Shah has been officially sworn in as the administrator of US Aid for International Development (USAID), making him the highest ranking person of Indian origin in any presidential administration.

The 39-year-old Indian-American was sworn in on Friday by Secretary of State Hillary Clinton as the chief of USAID, which oversees disbursal of $40 billion US foreign aid programme.

In this position, Shah would be leading the Obama Administration's effort of non-military aid to foreign countries, including Pakistan and Afghanistan.

"I believe Dr Raj Shah will be the transformational leader that USAID has been waiting for," Clinton said at the swearing in ceremony of Shah as chief of the USAID.

"One only needs to ask his wife Shivam the lengths to which Raj will go to achieve important goals. After all, this is a man who flew to India for one day to propose to her at the Taj Mahal when she was travelling there alone," Clinton said while giving a few insider details about the man.

"This is also a man who summated the 14,400-foot Mount Rainier, one of the most difficult climbs in the continental United States. It combines the challenges of an unforgiving glacier with the unpredictability of an active volcano. That may be the best preparation Raj has for working in Washington these days," she said.

"So he brings determination and an unwavering belief that anything is possible. Yet he also brings the humility and quiet confidence instilled by his family. He also carries with him the enduring images of his first trip to India as a boy with his parents, both immigrants from that country, where he saw that nation's rich history and diversity, but also saw human suffering on a scale that inspired him to action then and continues to inspire him now," Clinton said.

The Secretary of State said that the new USAID administrator brings a wealth of experiences -- a degree in medicine, a degree in business, his tenure at the Gates Foundation, at USDA.

"He did groundbreaking work in each place along the way, helping to transform the global system of vaccine financing," she said.

"And he has the support of those who have worked with him along the way. I received a 10-page, single-spaced, typed list of people who were willing to go to bat for Raj in the Senate with respect to confirmation  names of giants in the field of not only development, but diplomacy, public service, the private sector, the foundation world, here at home and internationally as well," Clinton said.

The Obama Administration had to wait for nearly a year to get the right person for this one of the most prestigious job of the US foreign policy.

"I know it's been a long wait to have a new Administrator named, and it took even longer to get him confirmed and sworn in, but it has been worth the wait, because in Dr Raj Shah, we have a passionate, visionary, experienced development expert at the helm.

"And I am so thrilled that he will provide the leadership that is needed today as we not only work in partnership on so many of the issues that we care deeply about, but that we continue to elevate the role of development in our foreign policy," Clinton said.