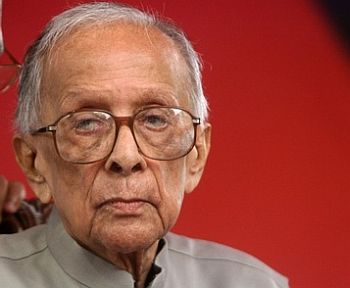 Describing Jyoti Basu as a powerful regional voice in the national political scene, Prime Minister Manmohan Singh said on Sunday he had turned to the veteran Marxist leader on many occasions for his advice on important issues and the response was always pragmatic.

Singh said the death of the 95-year-old Communist Party of India-Marxist leader marked the end of an era in the annals of Indian politics.

He was a man of great integrity with a deep commitment to secular values, the prime minister said in his condolence message.

"In a political career spanning more than six decades, the veteran communist leader steered his party to power in West Bengal, leaving a legacy of uninterrupted rule by the Left Front that he forged through his leadership and legendary skills in building consensus, " he said.

Observing that during his more than 20 years at the helm of affairs in West Bengal, Basu proved himself to be one of the most able administrators and politicians of independent India, Singh said he was 'a powerful regional voice in the national political scene and helped to strengthen Indian federalism.'

"Shri Basu will be remembered by the people of West Bengal for bringing stability and order to the State after the turbulent period of the early 70s and for the rural transformation he brought about through his visionary land reforms and his style of democratic and decentralised governance," Singh said.

The prime minister, who had called on the ailing Marxist leader in a Kolkata hospital on January 7, said throughout his long career Basu's first priority remained the welfare of ordinary citizens, the workers and the peasants.

"I have personally had a very long association with Shri Basu. On many occasions in my career, I turned to him for his sagacious advice on all matters, whether they related to West Bengal or to issues of national importance.

"His advice was statesmanlike but always pragmatic and based on unshakable values that he championed throughout his political career," Singh said.

"I feel a deep sense of personal sadness at the passing away of this great patriot, political luminary and intellectual," Singh said conveying his heartfelt condolences to the members of the bereaved family and to late leader's countless comrades, friends, admirers and followers.