How Kalam inspired the 'national anthem for youth' 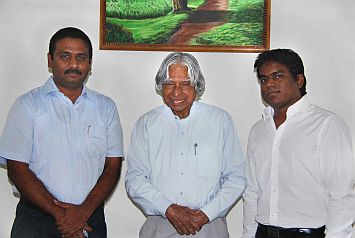 More than 20 years ago, when Doordarshan had the legends from all walks of life singing Mile Sur Mera Tumhara integrating India, the song became almost an anthem. Several years later, another such song is in the making, and instead of legends, those who will be featured in the music video are youth icons of India who can lead and inspire more than 50 per cent of India's population -- those below the age of 25.

The man behind the venture is Dhanapal Padmanabhan of Minveli Media Works, who had earlier made A Little Dream, a documentary on former President Dr A P J Abdul Kalam.

The Song of Youth, based on which the music video album will be made, is written by Kalam. The music composer who has tuned Song of Youth is Yuvan Shankara Raja, the youngest son of maestro Ilayaraja. The man who will shoot the video is Aravind Krishna, a young cinematographer from the Tamil film industry.

"I have been meeting Dr Kalam ever since I made the documentary on him. He was very impressed with it, and said it was a very honest effort. I had shown it at many colleges and schools in India and abroad. One day as we talked, he told me, more than 50 per cent of India's population is below the age of 25, and that India will be a young country for the next three decades. The information interested me a lot," said Dhanapal.

Dhanapal decided to make a music video on the song Kalam wrote for the youth, so that it will reach many more youngsters in India. He had two intentions in choosing the song. One, to celebrate Indian youth; and two, to inspire them.

When he told Kalam about his desire, he agreed that it was a good idea.

"He is always ready to do anything that reaches and inspires the youth of India. With a song by Kalam, I can reach as many youngsters as possible. And my intention was to make it as grand as possible. So, I have decided to show the diversity in our landscape and the huge talent that is available," Dhanapal said.

The obvious choice for the slot of music direction was Yuvan Raja, Dhanapal said, 'because of his young age and lineage.'

"When I told him about the project, he said he was honoured to compose music for such a video. He was very excited about the whole idea. He will be on the video leading the song with Dr Kalam," he said.

The music is now ready and almost all the young leading Indian singers have participated in the song.

Now comes the shooting of the video.

Dhanapal plans to shoot at all the heritage places in India like the India Gate, Jaipur Fort, etc. "I will show various Indian dance forms dancing to Kalam's song. Yuvan's music is aimed at the youth, so it will be fast paced and aggressive in nature. I want to have at least one shot and dance form from each state," he said.

The uniqueness about the music video, Dhanapal says, is that as it celebrates youth, only young achievers or youth icons, below the age of 35 or 40 will be shown in the video.

He has thought of some celebrity names from the field of sports and entertainment like Formula One driver Narain Karthikeyan from Tamil Nadu, Team India skipper Mahendra Singh Dhoni from Jharkhand, tennis sensation Sania Mirza from Andhra Pradesh, master blaster Sachin Tendulkar from Maharashtra, actor Surya from Tamil Nadu (mainly for the foundation he has started for girl children), and actors Vidya Balan, Deepika Padukone, Ranbir Kapoor etc from Bollywood.

But the interesting thing about the video will be the presence of some unsung heroes from various walks of like, who can also inspire others.

Dhanapal says, "As the song is about youth, I want to show them as real energetic people. So, the picture will not be static; they will be moving."

In the next one month, Dhanapal will travel all around India shooting the dance forms of each region in its place of origin.

Once the video is ready, at the launch in Chennai, there will be a live concert by Yuvan and the singers. Also participating in the event will be the dancers from various parts of India.

Dhanapal concludes, "This will be a national anthem for the youth in India till at least 2020!"

Kalam's mantra for a developed India