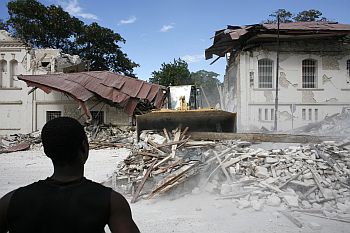 India's Consul General in Haiti Marie Andrine is safe following the devastating earthquake there, but there is no information yet on the 60-100 Indian civilians living in the country.

Indian Ambassador to Cuba Mitra Vasisht, who is also the Ambassador to Haiti and Dominican Republic, said the Indian Embassy in Havana managed to speak to one of the close relatives of Andrine, who confirmed the Consul General is safe.

Due to the collapse of the communication lines in the 7.0 tremor, the Consul General could not herself be contacted.

However, no information is yet available on the condition of other Indians living in Haiti, as the communication system has been devastated.

"We have been trying to get information whole day and would continue throughout the night," Mitra told PTI over phone from Havana.

A senior official of ministry of external affairs confirmed that all the 140 Indians belonging to the Central Industrial Security Force in Haiti were safe.

Officials the ministry of home affairs had been able to contact the country's capital Port-au-Prince to confirm the well-being of Indian CISF troops.

The CISF troopers are in Haiti as a part of the UN peacekeeping mission.

A MEA official told rediff.com that it was also trying to establish contact with around 50 Indians, mostly businessmen, who are live in different parts of Haiti.

India will announce aid for the earthquake-hit country by Thursday evening, said officials.

Mitra would be leaving Havana for Dominican Republic on Thursday from where she would try and get into Haiti to have a first hand assessment of the situation in the country.

Due to damage caused to the airport, Dominican Republic, which shares it boarder with Haiti, is the best way to reach the devastated country.

"I am personally going to Dominican Republic, which is the closest where I can personally go, to Haiti. Right now there is total breakdown of infrastructure and communication in Haiti," Mitra said.

'Haitian president is alive but nowhere to live'

The president of the quake-hit Haiti is alive but has nowhere to live, United States Secretary of State Hillary Clinton has said, following the devastating tremor that flattened buildings and also caused severe damage to the presidential palace.

"The government buildings in Haiti were severely damaged. The president is alive but has nowhere to live. There is no communications system," Clinton told mediapersons at Honolulu in Hawaii, before heading towards Washington.

The US is attempting to help set up a communications capability for the government, she said. The UN, which provided a lot of the authoritative assistance for the Haitian government, not only through MINUSTAH, the peacekeeping operation, but a very large UN mission that was focused on helping us to implement this broad plan for development and economic growth, has been devastated, Clinton said.

"So both the Haitian government and the United Nations were particularly hard hit," she added. "This is going to be one of the highest in terms of loss of life in recent years, so far as we can tell. The estimates are very high. I don't want to repeat them because we can't verify them; we just know what we're hearing anecdotally. But the Indian Ocean tsunami was such a terrible tragedy and with such high loss of life," Clinton said.

She said, "I have spoken with President (Barack Obama), the National Security Council, (Defense) Secretary Gates, (USAID) Administrator (Rajiv) Shah, as well as numerous other State Department officials, to talk through exactly what is happening on the ground," she said.

Image: A resident looks at debris being removed from the national palace after an earthquake in Port-au-Prince

PHOTOS: AAP celebrates after win over BJP in Delhi