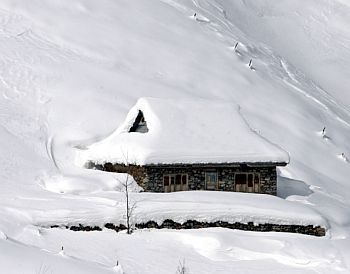 A fresh avalanche hit Kashmir Valley on Tuesday, killing an army jawan in Kupwara district; a day after 17 armymen met a similar fate during a winter warfare training exercise.

All the 14 army personnel were extricated from the deep snow but one of them died later.

A massive avalanche had slammed the popular ski resort of Gulmarg on Monday, killing 17 soldiers and injuring an equal number when the troops were in the midst of a winter warfare training on steep slopes about 70km from Srinagar.

The avalanche came hurtling down on the 60-strong combat troops as they were scaling the icy walls of high-altitude Khilanmarg peak in near zero visibility.

Image: A house is seen buried under snow in the Bakerwal Chak village, about 90 kms from Srinagar on Tuesday
Photograph: Danish Ismail / Reuters