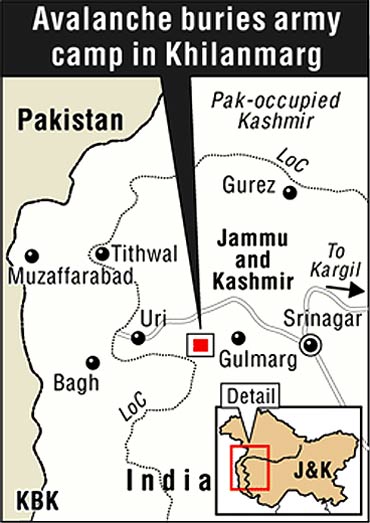 At least 15 Army troopers were killed and 17 injured when an avalanche struck a training camp of the Army in Khilanmarg area near the north Kashmir ski resort of Gulmarg Monday. Two are still missing.

A defence spokesman confirmed that 15 troopers died and 17 others were wounded some critically when the avalanche engulfed a group of trainees among the 440 who were up in the Khilanmarg area on a high altitude survival course.

"Two other troopers are still missing," he added.

The search operation had to be called because of heavy snowfall and darkness in the area, according to sources.

The massive avalanche was triggered this morning following three days of heavy and continuous snowfall in the area.

The Indian army joined by the local police mounted a massive relief and rescue operation accompanied by the officials of the state tourism department who have some of the best skiers in the staff.

A world famous ski-resort, Gulmarg attracts skiers from across the globe in winter.

The local disaster management agency had already issued a warning for the higher reaches of Kashmir, asking residents to move with caution in avalanche-prone areas.