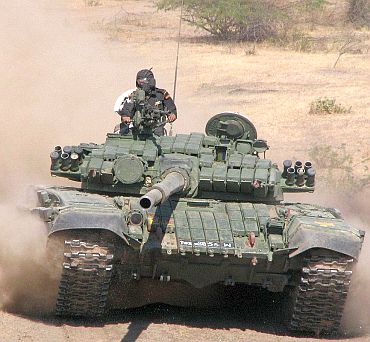 The Indian Army chief's concern that India's tank fleet was largely incapable of fighting at night highlighted only a part of the problem with the Russian T-72, the army's main tank. In fact, the T-72 is in far worse shape than General Deepak Kapoor described last month.

Another signal of the T-72's obsolescence was its recent withdrawal, by the army's Directorate General of Mechanised Forces (DGMF), from next month's comparative trials with the indigenous Arjun tank. An embarrassed DGMF has realised that, without major refurbishing, the T-72 was not in the Arjun's class.

But in the army's long-term planning, the T-72 -- which the more advanced T-90 will replace only gradually -- will continue to equip almost half of the army's 59 tank regiments as far in the future as 2022.

Business Standard has accessed a sheaf of technical reports and funding requests that actually quantify the state of the T-72. Exactly 32 years have passed since the first T-72s arrived in India; army guidelines stipulate 32 years as the service life of a tank. The earliest tanks from the army's 2,418-strong T-72 inventory should have already been retired, making way for a more modern tank, such as the T-90 or the Arjun.

Instead, the DGMF -- longstanding advocates of Russian equipment -- plans to spend Rs 5 crore per T-72, hoping to add another 15-20 years to that tank's service life by replacing crucial systems, such as its fire control system, main engine and night vision devices.

Russian T-90 tanks to take on the Arjun MBT