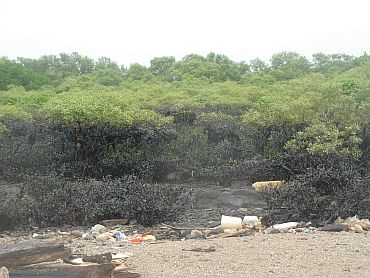 Even as the environmentalists and marine zoologists are crying hoarse over the impact of the oil spill, there is good news as far as the shoreline near Mumbai is concerned, reports N Ganesh

The Army Navy Environmental Park and Training Area at Colaba, which is popularly known as the United Service (US) Golf Club is unintentionally aiding the sea to cleanse the toxicity of the oil.

The US Club, which is barely a kilometer from the location of the prong's reef where MSC Chitra ran aground, has received its share of oil spill as the oil stained rocks and mangroves are testimony to the disaster.

In 2008 the Indian Navy employed biotechnology for the treatment of sewage water for maintaining its green top of the golf course spread over 47 acres and hundreds of trees.

About 10 lakh million litres of sewage water was sourced from the adjoining Naval Officers' Residential Area and was treated using biosanitizer chips, an invention of Indian Institute of Technology, Mumbai, that has received an American patent.

Seen from the US Golf Club now the shoreline with stained rocks appears remarkably healthy as the greenish tinge on the surface of the rocks indicate revival of moss.

Presence of crustaceans among the rock crevices and schools of fish dancing in shallow waters of the shore indicate more signs of life. The bigger mangrove trees, as expected, are holding their heads high despite the slick clinging to their feet.

Surprisingly the smaller mangrove plants, which were completely drenched in the oil spill, are also showing signs of revival as new green leaves are sprouting from its top branches.

"I am not all surprised by the observations. Damage to marine ecology from toxic pollution such as oil spill could be noticed by the impact it has on delicate species such as Pomfrets and crustaceans such as crabs. So far there has not been any reports on largescale deaths of Pomfrets and crabs.

Biosanitizers in the treated sewage which is going into the sea is aiding the sea to revive from the oil spill," said Dr Uday Bhawalkar, the scientist who invented the technology.

Morning walkers of the club first noticed the difference, as they were initially aghast at the site of spill drenching the rocks and mangroves. However to their amazement they noticed that in a matter of weeks the spill was disintegrating and marine life was reviving along the shoreline.

Dr Bhawalkar explained that oil in its purest form such as ghee is not toxic, and it is the inorganic components in the oil that make it toxic. Use of bacteria in tackling oil spill is not advisable as it devours only organic component of oil and the inorganic part of the oil continues to pollute the seawater. Pests are nature's pollution indicators and its cleaners, Dr Bhawalkar added.

Club members including naval officers who were associated with the initiative to biosanitize the sewage water in 2008 were not surprised by the recent developments on the shoreline as they had seen for themselves what the technology could do.

Use of untreated sewage water was causing stench, infestation of pests in the grass and mosquitoes in the air, there were also large number of crows that would fly away with the ball.

Moreover the labourers who were watering the grass and trees were refusing to use sewage water as it caused skin problems, said a retired naval officer.

He added that trees and grass on the greens would die prematurely. The committee managing the club then decided to set up a sewage treatment plant.

"We were in the last stages of clearing the proposal for setting up sewage treatment plant when a suggestion came forth to use biosanitizers. I was skeptical, as I had never heard about this technology that promised to be simple and cost a fraction of sewage treatment plant," said the retired naval officer.

"Reluctantly, permission to conduct a trial was given. The person came with a spraying apparatus and used sewage water to fill up the tank and put inside what appeared like small chips. We had given them one infested patch of green to demonstrate," he said.

"After the spraying the treated sewage, water pests were no longer visible on the surface," he added.

"Buoyed by the efficacy of the biosantizers in the demonstration, the club decided to drop the plans of setting up sewage treatment plant and instead used biosanitizers. The results could be seen from the first month itself as the presence of mosquitoes and red ants reduced drastically. The stench in the air came down to 5 meters of the spraying point from the previous 50 meters. Moreover stench dissipated very quickly leaving a freshness in the air. The grass had green sheen and trees became healthy," he said.

Image: Mangroves tree thriving despite the oil spill near the Mumbai shoreline

'Amar Jawan Jyoti too sacred to be touched, relocated'

'Infections are going to skyrocket'