News
Business
Movies
Sports
Cricket
Get Ahead
Money Tips
Shopping
Sign in  |  Create a Rediffmail account
Rediff.com  » News » 'US has more blood on its hands than Al Qaeda'

'US has more blood on its hands than Al Qaeda' 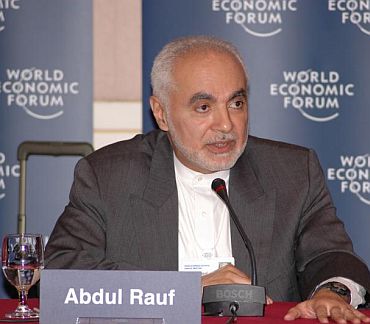 The proposed mosque near Ground Zero has got embroiled into a fresh controversy with the appearance of an interview of the Imam spearheading the project in which he said the "US has more Muslim blood on its hands than Al Qaeda has on its hands of innocent non-Muslims."

"We tend to forget, in the West, that the United States has more Muslim blood on its hands than al-Qaeda has on its hands of innocent non-Muslims," Imam Feisal Abdul Rauf said in a question-and-answer session at Australia's Bob Hawke Prime Ministerial Centre in 2005.

'It's beyond Islamophobia. It is hate of Muslims'

The interview was circulated by Investigative Project on Terrorism, which describes itself as a non-profit research group with the world's most comprehensive data centre on radical Islamic terrorist groups.

Imam Rauf pointed out that US-led sanctions against Iraq had led to the death of over half a million Iraqi children, which had been documented by the United Nations.

"When Madeleine Albright, who has become a friend of mine over the last couple of years, when she was Secretary of State and was asked whether this was worth it, she said it was worth it," the Imam told the audience.

Rauf also slammed the US government for supporting authoritarian regimes to further its foreign policy, which in turn had led to groups resorting to terrorism.

"Yes, it is true that it does not justify the acts of bombing innocent civilians, that does not solve the problem, but after 50 years of, in many cases, oppression, of US support of authoritarian regimes that have violated human rights in the most heinous of ways, how else do people get attention," he said.

On Sunday, The New York Times pointed out a passage in Rauf's 2004 book, What's Right With Islam, which said that killing innocent civilians was not justified for any cause.

"The truth is that killing innocent people is always wrong -- and no argument or excuse, no matter how deeply believed, can ever make it right. Islamic law is clearly against terrorism, against any kind of deliberate killing of civilians or similar 'collateral damage'," the Imam wrote.

Kuwait-born American citizen Rauf has asserted that Muslim community centre, which will include the mosque, is "a centre for all New Yorkers and its purpose is to interweave America's Muslim population into the mainstream society."

Rauf, who is presently touring the Middle East as part of a State Department trip to promote goodwill, told a Bahrain based newspaper that the US constitution was more in tune with Islamic principles than some laws and policies of Muslim nations.

"I see the Declaration of Independence as more compliant with the principles of Islam than what is available in many of the current Muslim countries," he said, according to the New York Post.