'My 9-year-old son wants to fight for azaadi' 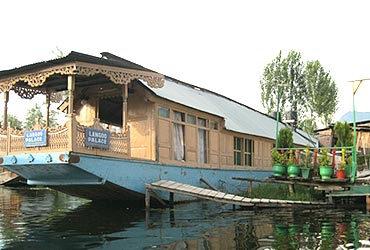 How does the common man view the protests in the Kashmir valley?

Sahim Salim meets a houseboat owner in Srinagar to find out.

The numerous houseboats lining the Dal Lake and the Jhelum river in Srinagar are empty, an odd sight at this time of the year.

Owners of these boats in the Kashmir valley make their money for the year during June, July and August.

Since violence has gripped the valley and curfew imposed for many days this summer, there is a big question mark what they will do for the rest of the year.

A houseboat owner says he is ready to suffer losses if this round of violence and protests head somewhere.

Meet Shoaib Meer (name changed on request), who operates a houseboat on the Jhelum. He does not wish to be photographed and he does not want his real name to be featured in this feature.

"Intelligence people monitor all news," he says. "If they see my name and photograph, they will pick me up."

His brows are lined with worry as he smokes a cigarette in the houseboat where I meet him.

"I have not made any money this year," he says. "Some tourists booked a couple of rooms, but the moment they heard there was a curfew, they cancelled. I have not paid the school fees of my four children -- three daughters and a son. I tried talking with the (school) management for a concession, but they are not relenting."

This is the third straight year that the houseboat business in the valley has been badly affected by the violence and uncertainty.

In 2008, Kashmir erupted after the Amarnath shrine land allotment controversy.

2009 witnessed angry protests and violence after the Shopian incident in which two women were allegedly gangraped and murdered.

"Both these incidents took place during our peak tourist season," says the houseboat owner. "Those two years, I made a third of what I usually make. This year, I have made five percent of what I make."

He explains that the maintenance costs of a houseboat are huge. The heavy rains this year have already forced him to invest a large amount of money in plugging a leak on the roof. The boat's floor also needs to be renovated every year.

Meer says the cost of maintaining a boat is about Rs 40,000 a year; he earns Rs 600 a night per room from the four rooms he rents out.

"I don't know where I will get the money for maintenance," he adds. "The government has imposed curfew and then expects us to send our children to school and lead our daily life. I ask you, where should I get the money from?"

"You don't know what kind of moral turmoil I go through every day. I have a 9-year-old son who wants to fight for azaadi (freedom). When I talk about azaadi my son says I am a coward for not going out to protest. He has asked me many times to take him there ( to the venue of the protests). He is not afraid. He is a typical Kashmiri youth."

"When I tell him the police will arrest him, he tells me that with his effort maybe his family can live in an azaad Kashmir. I keep an eye on him and sometimes even use force to keep the boy at home," Meer says, tears in his eyes. "He is too passionate and uncontrollable. I am worried he will sneak out one day to join the protests."

ALSO READ: In Kashmir, pelting stones for a price
Reading the mind of the Kashmiri stone-pelter
Explained: Why Kashmir is burning