Blast accused Madani faces arrest, no relief for wife too 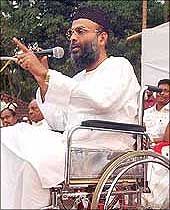 Controversial People's Democratic Party leader Abdul Nasser Madani is likely to be arrested soon for his alleged role in organising the Bengaluru blasts.

The high court had observed that the bail could not be granted in the larger interest of the society and that granting of bail would threaten the security of the society.

While dismissing the anticipatory plea, the court had stated that the act of the petitioner was within the definition of Unlawful Activities Prohibition Act.

Earlier, Madani had told media persons that he would approach the Supreme Court to seek anticipatory bail in the case.

PDP leader Poonthura Siraj, while speaking to rediff.com over telephone, said that Madani and the PDP will not offer any resistance to the arrest.

Siraj, however, said that Madani was one of the most respected Islamic scholars of the country and that it was cruel to arrest him on the eve of the holy Ramzan month, which is to start from August 11.

The Bengaluru police say they have enough proof about the involvement of Madani in planning the serial blasts in Bengaluru that claimed two lives on July 25, 2008.

According to the charge-sheet filed by the city police, Madani attended a crucial meeting along with terror suspect T Nasir in Coorg, 250 kms from Bengaluru, to plan the serial blasts.

The chargesheet further states that Nasir, who was arrested near the Bangladesh border, was the mastermind behind the blast, and that Madani helped him.

The police have registered nine cases in connection to the blasts and ten terror suspects have been arrested.

According to the charge-sheet, the controversial PDP leader from Kerala had traveled to Madapur in Coorg, where Nasir was working at a ginger plantation. The chargsheet alleges that Madani assured Nasir of all possible help in carrying out the blasts.

Nasir met Madani again after the blasts, says the charge-sheet. Nasir had arranged for 2,500 riyals for the terror attack, indicating that the funding might have come from Saudi Arabia, according to the charge-sheet.

The police suspect that Abdul Sattar, another prime suspect in the Bengaluru blasts, arranged for the funding.

Madani has been booked for waging war against the state and concealing information. But sources in the city police say that the non-bailable warrant against him is yet to be executed.

The Kerala high court relaxed the bail condition of Soofiya Madani, prime accused in the burning of a Tamil Nadu state corporation bus in 2005, for a month stating she should not leave Ernakulam district without its permission.

Soofiya, wife of Peoples Democratic Party leader Abdul Nasser Madani, had sought relaxation of the condition, stating that she wanted to look after her children and ailing husband.

She also said she wanted to be with her family during Ramzan.

Opposing her plea, the National Investigation Agency, which is investigating the case, submitted that if the condition was relaxed, she was likely to tamper with evidence and influence witnesses.

Investigation in the case is almost complete and chargesheet will be filed without further delay, it said.

NIA Inspector C Radhakrishana Pillai stated that if the bail condition was relaxed, she would travel outside the district without any restriction.

Justice V Ramkumar, after hearing both sides, relaxed the condition for a month.

The bus was burnt on September 9, 2005, in protest against Madani's imprisonment in Coimbatore central jail in connection with the serial blasts in the city in 1998, in which 58 people were killed.

'But for me, Kerala would have become a Kashmir'