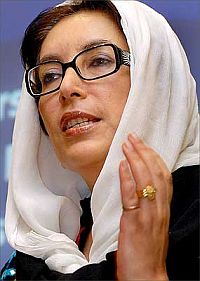 An independent United Nations-appointed panel probing the killing of former Pakistan Prime Minister Benazir Bhutto will on Thursday release its sensitive report on her assassination in 2007.

The report, initially scheduled for March 30, was delayed after Pakistan made a request to the panel urging it to include input from former United States secretary of state Condoleezza Rice, Afghan President Hamid Karzai and Saudi Arabia.

However, the three-member panel, headed by Chile's UN ambassador Heraldo Munoz, has not made any changes in its report.

"The Commission of Inquiry that was formed to determine the facts in the 2007 assassination of former Pakistani Prime Minister Benazir Bhutto will formally present the report on its work to the Secretary-General (Ban Ki-moon) on Thursday afternoon," UN spokesperson Martin Nesirky told reporters.

"The Secretary-General then intends to transmit it to the government of Pakistan, and he will also share it, for information purposes, with the members of the Security Council," he added.

Bhutto, the first woman prime minister of a Muslim country, was killed on December 27, 2007 in a gun and suicide attack after addressing an election rally in Rawalpindi, a garrison city near the capital Islamabad.

Bhutto's supporters, not satisfied by Pakistani investigations, accused that Musharraf and his allies were involved in the murder. Countrywide polls conducted at the time indicated that the majority of Pakistanis believe Musharraf's government played a role in Bhuttos' murder.

When her husband Asif Ali Zardari became president, he asked the UN to carry out an independent investigation.

The commission commenced on July 1, 2009 and was to have submitted its report on December 31, 2009 but its term was extended for another three months.

After submitting the report to Ban, the commission will divulge its contents to reporters at the UN headquarters.