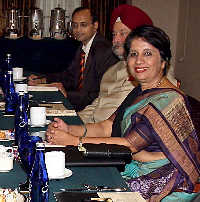 On the eve of crucial talks between Indo-Pak Foreign Ministers, top diplomats of the two countries met in New York on Saturday to prepare ground for the parleys, where India is expected to demand speedy probe into the Mumbai attacks and decisive action against their mastermind, Jamaat-ud-Dawaah chief Hafiz Mohd Saeed.

Foreign Secretary Nirupama Rao and her Pakistani counterpart Salman Bashir held talks in New York at the Roosvelt Hotel on the margins of the annual United Nations General Assembly session, the first high-level contact between the two sides since the Prime Ministers of the two countries met at Sharm el-Sheikh, Egypt, in July.

In the run-up to the meeting, Prime Minister Manmohan Singh, in a tough message, made it clear to Pakistan that it must stop state-sponsored terrorism to normalise relations with India.

"India's message is that India seeks to normalise its relations with Pakistan. But the only obstacle is that Pakistan should give up its old attitude regarding the use of terror as an instrument of state policy," Singh told a press conference in Pittsburg, while winding up his trip there for the G-20 summit

On the Mumbai attacks, he said, "We have supplied our material and evidence for them to carry out investigations. Although the tragedy took place in India, the conspiracy took place in Pakistan. Pakistan has admitted to this. We want them to bring to book the culprits involved in the November 26 attacks."

India has also specifically demanded decisive action against Saeed, also the founder of Lashkar-e-Tayiba, for being the "chief conspirator" of the Mumbai attacks and cautioned Pakistan against camouflaging the issue saying, "We can see through the game."

"We want Saeed to be tried for his Mumbai attack," External Affairs Minister S M Krishna said recently. "They (Pakistan) are trying to camouflage the whole idea to suit themselves. So India cannot be lulled into some kind of satisfaction that they are proceeding against them. We can see through the game," he said, adding India wants more decisive action against the perpetrators of the 26/11 attacks.

Conflicting reports have been emanating from Pakistan about the status of Saeed. While Pakistan Prime Minister Yousuf Raza Gilani said he was "in custody", Punjab police chief Tariq Saleem Dogar stated that he was not under arrest or house arrest and has also not been placed in protective custody.

Pakistani police recently registered two FIRs against Saeed under the Anti-Terrorism Act for inciting people to wage 'jehad' and seeking funds for his banned group. The JuD chief has moved the Lahore High Court against the cases, which he alleged were "fake".

Krishna also said the Mumbai attacks would be the "focal point" of his talks with his Pakistani counterpart Shah Mahmood Qureshi in New York on Sunday.

While India is "sceptical" about the outcome of the Krishna-Qureshi meeting in the absence of Islamabad acting against perpetrators of the Mumbai attacks, the Pakistan Foreign Minister recently said he would adopt a "positive approach" for the talks.

He also hoped that his engagement with Krishna would be meaningful. India suspended the composite dialogue process with Pakistan in the wake of the Mumbai attacks in November last year and linked the resumption of talks to Pakistan taking action against the perpetrators of the assault.

Image: Foreign secretary Nirupama Rao with her Pakistani counterpart in a meeting in New York on Saturday