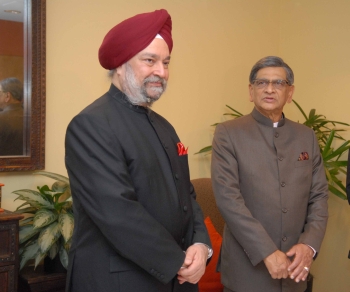 With the United States Senate voting to triple the non-military aid to Pakistan at $1.5 billion, India on Friday once again expressed concern over such funds being diverted by Islamabad to support hostile operations against it.

External Affairs Minister S M Krishna, who is in New York to participate in the opening session of the United Nation General Assembly, said New Delhi was concerned as former Pakistan President Parvez Musharraf had himself disclosed that US aid to fight terrorists were used to bolster defences against India.

The US Senate has passed the Kerry-Luger Bill, which will give Pakistan billions of dollars in aid money for the next five years. The money is being given for developmental efforts within the country.

"With respect to the aid that was given to Pakistan, we have brought the attention of the government of the United States that India's concern is only that aid has to be appropriated for the purpose for which it is provided by the US," Krishna said, urging the US to monitor the use of the aid by Pakistan.

Incidentally, its early drafts, the bill had a condition that Pakistan would not be a base for terrorist attacks against India, but now it has been replaced with a clause on cooperation with Pakistan's neighbours on war against terror. Krishna is also scheduled to meet his Pakistani counterpart Shah Mehmood Qureshi on Sunday.

"My focus will be on terror related issues. Terror that visits us every now and again in the neighbourhood, which is a constant source of worry to India," he told journalists when asked about the meeting.

"Inevitably, 26/11 will have to be discussed with Pakistan because the attack on Mumbai emanated from Pakistani soil, so we will have to address India's concern on that score," he said.

"I'm going to take a realistic stand, not too tough or soft but a factual stand," he added.

Krishna is also scheduled to meet Secretary of State Hillary Clinton. He said several bilateral issues would be discussed, including areas concerning the security of India, in the meeting.

Harpoon charges on Pak not a rider on US aid