Pak should be serious and sincere about punishing 26/11 terrorists: India 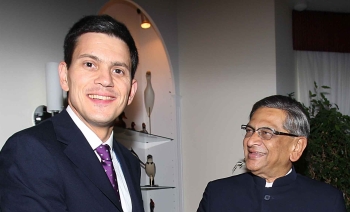 External Affairs Minister S M Krishna on Wednesday said he was 'sceptical' about the outcome of his meeting with his Pakistani counterpart Shah Mahmood Qureshi, in the absence of Pakistan acting against the perpetrators of the terror attack on Mumbai. He also urged the United States to be more 'circumspect' in providing aid to Pakistan that was being diverted for use against India.

Krishna is scheduled to meet Qureshi on September 27 on the sidelines of the United nations General Assembly.

He said unless the Pakistan government shows 'seriousness and sincerity' in going after the perpetrators of the Mumbai attacks, an 'atmosphere of trust' cannot be created between the two countries.

"I don't think an atmosphere of trust would have been created between India and Pakistan to proceed with a meaningful dialogue. In the absence of that, I am sceptical about it," he said during an interview to a TV channel.

Krishna added that everything depended on what Pakistan does between now and when the two foreign ministers meet. On India's concerns over Pakistan misusing American aid against it, Krishna said, "It will be my endeavour to impress upon Secretary of State Hillary Clinton that at least from hereafter the US need to be circumspect in their aid which is provided to Pakistan".

The US has given a whopping $7 billion in aid to Pakistan since the 9/11 attacks in America to fight terrorism and India has been concerned about the assistance being used against it.

Confirming India's fears, former Pakistan President Pervez Musharraf recently admitted that he had violated the rules governing the use of the military aid, but justified his action saying he had 'acted in the best interest of Pakistan'.

'Pak not serious about punishing 26/11 terrorists'

US asks Pakistan to prosecute 26/11 terrorists