An alleged terror plot, exposed after raids in the suburbs of New York this week, may have been targeting a major transportation centre in the city like a railroad or subway station. Backpacks, computers and maps were found during the searches conducted by the Federal Bureau of Investigation, and field tests turned up positive for explosives allegedly found in raids in the New York borough Queens, a media report said.

Investigators said that there was planning and preparation for an attack, very likely in the New York area such as a large railroad or subway station, essentially where airport-style screening is absent. The suspects were "real-deal terrorists" operating and planning an attack in America, CNN quoted sources as saying.

They added that an unprecedented level of resources is being devoted to the investigation, including the placement of a hostage rescue team in New York for possible raids. 24-year-old Colorado resident Najibullah Zazi, at the centre of the week-long probe, met FBI agents on Thursday in Denver for a second day, as his lawyer disputed a report that bomb-making plans were found on the man's computer.

The Denver area is the next area of investigation after Zazi became the centre of the probe, the report said. Federal agents searched the home of Zazi besides searching the nearby residence of his aunt, Rabia Zazi, early this week.

A law enforcement official told CNN that diagrams showing how to make bombs were found on the computer that Zazi had with him when he was stopped in New York during a recent visit, but his lawyer Arthur Folsom dismissed the allegation.

The Associated Press has reported that an FBI-New York Police Department task force suspected that Zazi may be involved in an alleged plot involving homemade hydrogen peroxide-based explosives.

In interviews to the media, Zazi denied any terrorist involvement. Meanwhile, the FBI Director Robert Mueller in his brief to a Senate committee said that he did not think the investigation had revealed any "imminent danger". 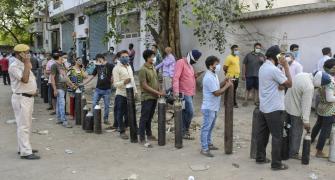 6 Delhi hospitals have run out of oxygen: Sisodia

26/11 terrorists had come from Karachi: FBI