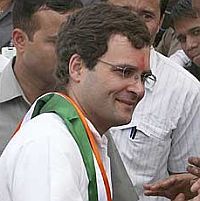 Congress general secretary Rahul Gandhi traveled in the chair car of the Shatabdi Express on Tuesday to reach Ludhiana from Delhi.

After his mother Congress chief Sonia Gandhi, who flew to Mumbai in the economy class on Monday, Rahul decided not to travel in the executive class of the super fast train when he arrived in Ludhiana to inaugurate a four-day camp of young Congressmen.

Punjab Youth Congress chief and Member of Parliament Ravneet Singh said Rahul will return to Delhi in the same class later in the evening.

The move came only a few days after the ''austerity'' measures were suggested by Mukherjee.

High drama as UP, C'garh cops tussle to arrest anchor

How Chhattisgarh cops failed to arrest anchor in UP

Where straight drive is a way of life:Rahul Dravid