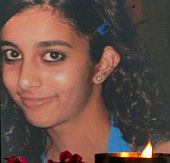 A day after the Delhi Police's crime branch reportedly traced murdered teen Aarushi Talwar's mobile phone, her parents on Tuesday said its recovery provides a ray of hope for bringing the murderers to justice.

Talking to media persons, Aarushi's father Rajesh Talwar said, "The recovery of the mobile phone is a ray of hope for us that the culprits will be caught. We have been praying since last year."

Aarushi's mother, Nupur Talwar, said: "Aarushi's cell phone being found is like a ray of hope that has come in after a year-and-a-half. We have been praying and hoping against hope that something comes up. I hope everyone prays for and is with us."

When asked about the CBI role in probing the case, Rajesh Talwar said: "I will not make any claims regarding lapses made in probing the case. I just hope the case is cracked soon and those responsible for the gruesome act are brought to justice. Let the agency probe the case without any interference."

Meanwhile, the CBI said that it would not reveal more information regarding the case to the media.

On Monday, the Delhi Police and the Crime Branch found Aarushi's mobile phone in Bulandshahr in Uttar Pradesh. The phone had been missing since May 18, 2008.