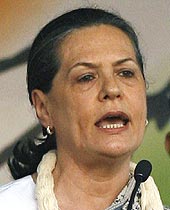 Skirting the issue of a pre-poll alliance with Sharad Pawar's Nationalist Congress Party, Congress president Sonia Gandhi on Monday kicked off her party's campaign for the October 13 Maharashtra assembly polls, with a call to workers to reach out to the people with renewed vigour.

Sonia reaffirmed her party's irrevocable commitment to protecting the interests of the 'aam admi', which was the focus of the Congress' policies and programmes.

"Your enthusiasm and vigour gives me confidence that the Congress will emerge victorious in the Maharashtra assembly elections once again," she told party workers after inaugurating the renovated Congress headquarters in Mumbai.

The renovated Congress headquarters has been named after former prime minister Rajiv Gandhi.

"You deserve kudos for ensuring that the fruits of the policies and programmes of our government in the state reached the targeted beneficiaries," she said, asking them to reach out to the masses.

Describing Mumbai as the 'pride of India', Gandhi said the United Progressive Alliance as well as the state government is taking steps to make the megapolis, a "world class city with the infrastructure of international standards".

Gandhi said the programmes and policies of the UPA government in the last five years had benefited the common man and the electorate had endorsed the work of the government by giving it a tremendous mandate in the recent Lok Sabha polls.

Gandhi said she was experiencing a strong sense of responsibility and fond memories while inaugurating the Mumbai unit office. "Congress is not just a political party but a broad mass movement. Empowering the common man is the ultimate aim of the party," she said, adding that all the tall leaders of the party had worked tirelessly towards nation building.

"Their contribution continues to remind us of our responsibility as Congress workers," she said.

Maharashtra had given the country some of its tallest leaders like Lokmanya Tilak, B R Ambedkar, Chhatrapti Shahu Maharaj, Mahatma Phule, Dadabhai Naoroji, Gopal Krishna Gokhale, she said.

"Mumbai's bond with the Congress is very deep. The city is not only the birthplace of the party, but the 'Quit India' movement which culminated in India getting her freedom was also launched from this great megapolis. Rajiv Gandhi taught India to dream of the 21st century at the Congress centenary celebrations in the city," she said.

Gandhi said her late husband had dedicated himself to the country, society and the Congress. "He went through lot of struggle to achieve his dream of leading India into the 21st century and we are now experiencing the fruits of his hard work," she said.

Cautioning the party workers that the country was facing many challenges, Gandhi said the party was committed to successfully tackling them.

"We will not rest till there is 'saccha swarajya' (real self-rule) in each and every common man's life," she said.

Extending Eid and Dusshera greetings to party workers, Gandhi exhorted them to work with the same enthusiasm and spirit like they did in the Lok Sabha elections, to ensure that the Congress wins maximum seats in the assembly polls. 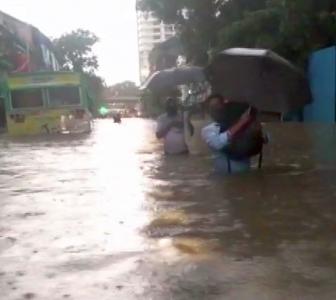 No decision on pre-poll alliance with NCP:Congress