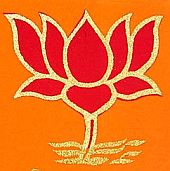 After its poor show in the Lok Sabha elections, the Bharatiya Janata Party on Monday received a boost in the assembly by-polls, registering an impressive victory in Gujarat and bagging one seat each in Madhya Pradesh and Uttarakhand, where it got a majority in the state assembly.

In Gujarat, the ruling BJP bagged five of the seven seats that went to polls on September 10 while Congress won Dhoraji and Kodinar, held by the BJP.

BJP, which had run a low-key campaign in the by-election following the party's poor show in the Lok Sabha polls and subsequent defeat in the Junagadh civic body polls, has wrested Dehgam, Jasdan, Chotila and Danta from Congress.

In Sami, BJP candidate Bhavsing Rathod, who had won the last assembly polls from the same seat on a Congress ticket, has retained his seat in the by-poll.

The Congress has wrested BJP's bastion Kodinar in Saurashtra while retaining Dhoraji, a party stronghold.

"The results of the by-elections show that the BJP still remains the preferred choice of the people of Gujarat," said BJP general secretary Jayantibhai Barot.

Of the seven seats where by-elections were held, six were held by the Congress and one by the BJP.

The BJP also secured a majority in the Uttarakhand assembly by winning the Vikasnagar seat, taking its tally to 36 in the 70-member House.

Expressing happiness over his party's performance, BJP president Rajnath Singh said the results have shown that the Congress is losing ground not only in Gujarat but also in Uttarakhand and Madhya Pradesh.

The BJP's victory assumes significance especially after it lost all the five seats in the recent Lok Sabha elections in the state that forced B C Khanduri to resign as the chief minister.'

In Madhya Pradesh, the ruling BJP wrested Tendukheda seat from the Congress, with its nominee Bhaiyya Ram Patel winning with a margin of over 13,000 votes.

The Opposition Congress retained the Gohad assembly seat with its nominee Ranveer Jatav winning by 22,571 votes.

In Sikkim, the ruling Sikkim Democratic Front won the Namchi-Singhithang assembly seat, leading the SDF to retain all the 32 seats in the House. SDF nominee Binod Kumar Rai won by a margin of 4,340 votes.

In Andhra Pradesh, the Congress retained the Tekkali seat. The by-election was necessitated following the death of its MLA K Revathipati.

The party had nominated his widow K Bharati from the seat, which she won by around 7,000 votes against her nearest Telugu Desam Party rival K Achhayya Naidu, who secured 52,077 votes.

By-elections were held for 20 seats across seven states on September 10 but counting was taken up for only 12 seats on Monday.

BJP and resurgent India: Are they incompatible?

The knives are out in the BJP