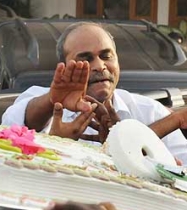 The Communist Party of India-Maoist on Tuesday finally broke its silence over the tragic death of Andhra Pradesh Chief Minister Y S Rajasekhara Reddy. The outlawed organisation described his death as the end of an era of a 'dictator, a war lord and an undemocratic World Bank agent'.

Koteshwara Rao alias Kishenji, a senior underground leader of the CPI-Maoist, told rediff.com in a telephonic interview that the lobbying by senior Congress leaders in the state, to make YSR's son Jaganmohan Reddy the next CM, had revealed the true colours of the party. "It is all about dynastic rule. They want the son of the Raja to be the next Raja," he said.

He dismissed the outpouring of grief across the state after YSR's demise as an orchestrated show. "They are claiming hundreds of people died for him. We understand that only 10-15 people ended their lives for him and we see it as part of the culture of south India, where people have blind love for film stars and politicians," Rao said.

"Even (Telugu Desam Party leader) Chandrababu Naidu had believed that there was a sympathy wave in his favour after Maoists attacked him in October 2003, but he was thoroughly defeated by the people (in the state assembly elections in 2004). The same thing will happen with the Congress," he said.

Rao described caretaker Chief Minister K Rosaiah as a 'modern day Chanakya' who will support Jaganmohan in the same way he supported YSR. "The change of chief minister makes no difference to us. We will continue our struggle," he said.

The Maoist leader described Jaganmohan as a 'war lord like his father and grandfather in Cuddipah'.

Mentioning the use of official machinery including Sukhoi fighters and even United States' satellites to look for YSR and his chopper in the dense Nallamalla forest for nearly 24 hours, Rao claimed that this proved that the most modern weapons were useless in a place like Nallamalla forest.

He also dismissed the claims of unprecedented development in the state, under YSR's tenure, saying, "The YSR government was just a continuation of Chandrababu Naidu's government. Both of them followed the World Bank model with the support of United States imperialism and World Bank money," he said.

The Maoist leader warned that the state was heading towards confrontation and clashes between Reddy and Kamma communities. He claimed that the World Bank and US were trying to make the state a battle-ground between the two for the sake of power.

Rao alleged that the YSR government had taken away thousands of acres of land from farmers for the creation of special economic zones and warned that this will 'trigger unprecedented struggle in the days to come'.

"We have provided the leadership for similar struggles in Singur and Lalgarh in West Bengal and continue to do so elsewhere," he said.

After coming to power in 2004, the YSR government had invited the CPI Maoist's leadership for peace talks. But the dialogue process broke down soon, and the Maoists reverted to their armed struggle against the establishment.