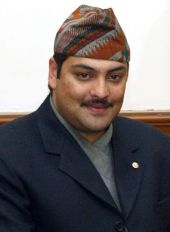 In a statement, the flamboyant crown prince on Wednesday denied the media reports and called them "deceptive and ill-intended".

On Monday, media reports quoted two Nepalese citizens, who had been arrested with fake notes in Bhopal in Madhya Pradesh, as claiming that the former prince Shah was also involved in the fake currency racket run by Dawood Ibrahim from Pakistan.

In the statement, Shah said the Indian media had "once again" targeted him with "false and malicious" intention and the news against him were directed to spread "illusion in the minds of the Nepalese people".

Shah said he was seriously concerned over the news, which were "imaginary and fictitious". It is just an instance of "well-orchestrated and condemnable propaganda directed against the sovereign people of Nepal from a foreign land", he said.

He said he had been dragged into the controversy taking advantage of the current political fluidity in the country even though he had been leading a "responsible and dutiful" life as an ordinary Nepali citizen.

Shah also hoped that the state will protect the rights of all the Nepalese when such an ill-intentioned defaming allegations are directed against them.