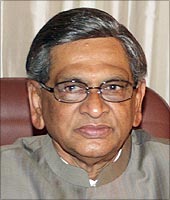 A day after India gave "additional information" to Pakistan on the Mumbai terror attacks, Union External Affairs Minister S M Krishna on Saturday said that New Delhi will keep providing more evidence to Islamabad "as and when" it is collected.

The statement comes in the backdrop of Pakistan Foreign Minister Shah Mahmood Qureshi's claim that India was not responding to Islamabad's request for intelligence sharing on possible terror attacks as indicated by Prime Minister Manmohan Singh recently.

"We are in continuous touch with the government of Pakistan. It is an ongoing exercise between India and Pakistan. So, as and when, we collect more evidence we will keep sending it across to Pakistan and that is what Foreign Secretary did yesterday," Krishna said.

In her meeting with Pakistan High Commissioner Shahid Malik on Friday, Foreign Secretary Nirupama Rao handed over "additional information" on Mumbai attacks including inputs on some of the key aspects and accused involved.

New Delhi had earlier given four dossiers to Islamabad providing inputs on the terror suspects and logistics including communication used by those involved in carrying out the attacks in Mumbai.

They also contained responses to many queries raised by Pakistan relating to lone surviving terrorist Ajmal Kasab and others.