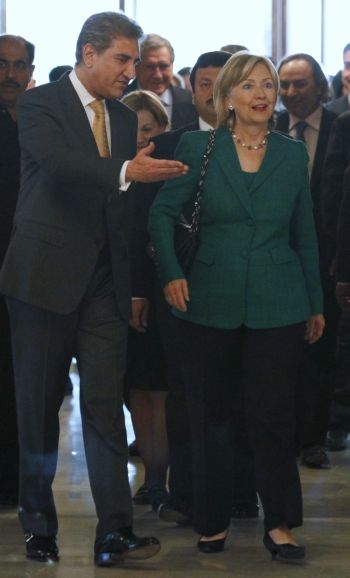 US Secretary of State Hillary Clinton on Wednesday announced a series of humanitarian and developmental aid to Pakistan totaling USD 243.5 million (about Rs 11,500 million), among other aid packages, on the first day of her visit to the country.

She also attended a programme designed to help Pakistan's poorest women and their families, and also had a meeting with and attended a dinner hosted by President Asif Ali Zardari at the presidential residence, he said.

"Throughout she underscored America's broad partnership with Pakistan's democratically elected government. This is a partnership that covers all dimensions of our bilateral and people-to- people relations," Kelly said.

Clinton also announced the first phase of a signature energy programme by the US to support Pakistan's energy development, helping to improve the quality of life for all Pakistanis and support their economic development, he said.

At her meeting with the prime minister, Clinton pledged USD 55 million that will assist Pakistan and United Nations agencies to provide humanitarian relief to families displaced from North and South Waziristan and the North West Frontier Province.

It is a monthly cash subsidy programme designed to help some of Pakistan's poorest women and their families, Kelly said, adding that the US would be contributing USD 85 million for this programme.

Kelly said the US extends its deepest sympathy to the victims of brutal attack in Peshawar and to families and friends of those who lost their lives.

"We continue to stand with the Pakistani people, who have seen firsthand the effects of violent extremism," he said.

"We also honour the brave Pakistani military, police and security personnel, who are now engaged in rescue efforts, as well as those who are fighting to combat extremism and create a safe, stable and secure Pakistan," he said.

Noting that Pakistan is in the midst of an ongoing struggle against brutal extremist groups who kill innocent people and terrorise communities, Kelly said: "These attacks show the lengths extremist elements are willing to go as they attempt to force their agenda onto a people who only wish to go about their daily lives in peace."

Source: PTI© Copyright 2023 PTI. All rights reserved. Republication or redistribution of PTI content, including by framing or similar means, is expressly prohibited without the prior written consent.
Related News: Ian Kelly, USD, Hillary Clinton, Pakistan, US
Print this article