Pak charges on India are far from truth: PM 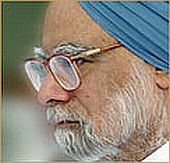 Confident that Jammu and Kashmir was 'turning the corner' and entering 'a new chapter' in the peace process, Prime Minister Manmohan Singh on Thursday hoped that the government's offer of dialogue would be reciprocated in the spirit it has been made.

Addressing a press conference just before winding up his two-day visit to Kashmir, he said the government was committed to work for peaceful resolution of all problems facing the state, both in internal and external dimensions.

He said India was ready to discuss all issues with Pakistan provided it creates an 'atmosphere in which negotiations can be fruitful' but made it clear that it will 'not act under pressure of anybody.'

"We have to carry all stake-holders in Jammu and Kashmir to achieve peace and development in the state," he added.

Singh said there is 'no pre-condition' for talks with Pakistan but the 'practical aspect' is that there will be no headway till Pakistan brings under 'effective control' the terror elements in that country.

"I have said earlier that India had no role in Balochistan and those who level these charges, the senior minister in Pakistan, know jolly well that there is no truth in it," PM Singh claimed.

"Nothing can be far fetched and far from truth," he said, adding, in fact it was India which was a victim of terrorism aided and abetted from Pakistani soil. "Both (charges on) Balochistan and Taliban are totally false," he said.

To a question whether India was satisfied with Pakistan's steps on Mumbai attacks, he said, "Obviously we are not satisfied with action taken by Pakistan.  We sincerely hope that Pakistan government will bring all the perpetrators of the 26/11 attacks to justice."

To a question about Hurriyat leader Mirwaiz Farooq justifying the use of gun, Singh said he did not want to ready too much into what was said in anger.

"I hope all those who believe in the good of Jammu and Kashmir will respond favourably to my appeal for dialogue. We are willing to engage in discussions with every group and all those who want abjure violence," he said.

PM Singh also firmly told the Organisation of Islamic Countries to keep its hands off Kashmir, adding that it had no locus standi to comment on the region that was essentially an internal matter of India.

It may be recalled that earlier this month, the 56-nation grouping had met in New York and issued a statement that said that it supported the people of Jammu and Kashmir in the 'realisation of their legitimate right of self determination in accordance with relevant United Nations resolutions and aspirations of Kashmiri people.'

The statement also commented on the human rights situation in Jammu and Kashmir and the death of two women in mysterious circumstances in Shopian recently.

The Indian government has already given a strong rejoinder, condemning and rejecting the OIC statement. A government spokesman said, "It is regrettable that the OIC has commented on India's internal affairs. We condemn and reject this."

"Inherent in OIC's statements and actions on the issue of Jammu and Kashmir is a complete inability to understand India's position," he added.

It was asserted that Jammu and Kashmir is an integral part of India and 'it is our (government's) firm position that the OIC has no locus standi in matters concerning India's internal affairs.'

Meanwhile, the PM also announced that, "The Union power ministry will appoint a special group comprising representatives of the finance ministry and the planning commission to monitor the power sector in the state."

"Centre will allocate additional funds of Rs 640 crore for the timely completion of the Mughal Road, the second highway to link Kashmir with rest of the country," PM Singh added.

Replying to a question on Union Railway Minister Mamata Banerjee's reported remarks that there were no Maoists in the country, the Prime Minister said he had not seen the statement of his cabinet colleague.

"Well, I have not seen this statement of the Railway Minister. Obviously, the Maoist threat is a reality and the government of India is duty bound to deal with it in an effective manner," he said.

Singh refused to comment on West Bengal government negotiating with the Naxals for the release of abducted policemen.

"Well, it would not be proper for me to comment on any state government. I refuse to enter into any argument with anybody on that," he said.