Dalai Lama an honoured guest of India: PM to China 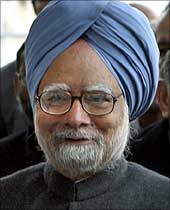 Describing the boundary question with China as a "complex issue", Prime Minister Manmohan Singh on Sunday said it cannot be "wished away" and both sides have an obligation to maintain peace and tranquility pending a solution.

A day after he met his Chinese counterpart Wen Jiabao in Thailand on the sidelines of the Association of Southeast Asian Nations-India and East Asia Summits and talked about the border row, Singh said the foreign ministers of the two countries would discuss the problem in detail when they meet in Bangalore on Tuesday.

He noted that Chinese Foreign Minister Yang Jiechi will be visiting India in two days and the foreign ministers of the two countries would have an opportunity to "discuss all issues which have bearing on our relationship".

The meeting between Singh and Wen came in the backdrop of war of words over Arunachal Pradesh and some other issues like the Dalai Lama's proposed visit to the state.

Pointing out that the two countries had "established government channels available to exchange views" on all bilateral issues, Singh said, "One doesn't have, therefore, to go to the media to accentuate or exaggerate the amount of differences that prevail."

Addressing a press conference before winding up his two-day visit here, the prime minister said he had discussed with Wen all issues, including the boundary question, problems concerning common rivers and matters related to Tibetan spiritual leader the Dalai Lama.

"All issues were discussed," he said about his meeting with Wen in the backdrop of war of words over Arunachal Pradesh and some other issues like the Dalai Lama's proposed visit to the state.

"Boundary problem is a complex issue and cannot be wished away," Singh said, adding that "pending solution of the boundary question, both countries have an obligation to maintain peace and tranquility along the borders."

"I explained to Premier Wen that Dalai Lama is our honoured guest and he is a religious leader," Singh said.

To a question on the Dalai Lama's proposed visit to Arunachal next month to which China has objected, Singh said he was not aware of the Tibetan spiritual leader's plans.

The prime minister said he had also raised with Wen issues related to common rivers, like water-sharing and reported construction of dam by China on Brahmaputra river.

"I did raise this issue with Wen and conveyed to him that cooperation in the area of trans-border rivers is of mutual benefit," he said.

"Premier Wen said that keeping in mind the overall friendly relations and the humanitarian aspects the Chinese side has been providing hydrological data during the flood season," Singh said.

"He said that relevant discussions on trans-border river issues could be held through the expert-level mechanism that we have constituted," he said.