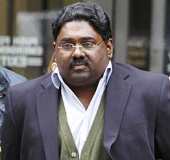 More than 30 victims and survivors of attacks by the Liberation Tigers of Tamil Eelam, have filed a civil suit against indicted billionaire and Sri Lankan American hedge fund manager Rajakumara Rajaratnam.

Rajaratnam, 52, founder of the Galleon Group, was indicted on October 16 for insider trading. The litigants have accused him of knowingly financing the LTTE and providing it with other forms of support through front organisations.

Pro-Eelam and pro-LTTE supporters in the US, who did not want to be identified, told rediff.com that the Sri Lankan government was behind the lawsuit that was filed October 22 in the US District Court in New Jersey.  They pointed out the expeditious manner in which it was filed hardly a week after Rajaratnam's arrest. But Sri Lankan government officials denied that Colombo had anything to do with it.

Spokespersons for the law firm, Motley Rice LLC, who filed the complaint on behalf of the plaintiffs, refused to discuss the background to the suit.

In the complaint, family members of those killed and survivors of the terrorist attacks and bombings carried out by the LTTE alleged that Rajaratnam and the family foundation headed by his father Jesuthasan M Rajaratnam provided several millions of dollars in funds to the Tamil Rehabilitation Organisation (TRO), which in turn siphoned off the money to the LTTE.

The money was sent under the guise of charitable contributions for the minority Tamil population in the island nation, allege the plaintiffs, and part of it was used to launch terror attacks.

In November 2007, the TRO's assets were frozen by the United States Department of Treasury because of its alleged ties to the LTTE, and according to ABCNews.com, Rajaratnam was the single largest known contributor to the TRO.

According to the report, the Federal Bureau of Investigation had also raided TRO fund coordinator Nagaratnam Ranjithan's home in 2006.

The Sri Lankan government also froze the organisation's assets in Sri Lanka, but neither Washington nor Colombo charged Rajaratnam with any crime, in spite of his contributions to the TRO.

Adam Szubin, director of the Treasury's Office of Foreign Assets Control, said, "The TRO passed off its operations as charitable, when in fact it was raising money for designated terrorist groups responsible for heinous acts of terrorism."

"We are seeking justice for the victims of LTTE terrorism, accountability for those whose money paid for the injuries and murder of our clients and their loved ones, and a strong deterrent against anyone who seeks to support terrorists of any stripe," said lead counsel Michael Elsner.

"The defendants, we allege," he said, "have the plaintiffs' blood on their hands because those who paid for murder are just as culpable as those who committed the acts," he said.

He added, "We have what we believe is incontrovertible evidence that the money of Mr Rajaratnam and his father made its way to the LTTE as intended, that they knew the LTTE was engaged in a massive campaign of terrorism, and that they supported the LTTE's goals and tactics."

Motley Rice is known for its pioneering work in the field of anti-terrorism-financing litigation, with landmark lawsuits brought on behalf of the victims of 9/11, anti-Israeli suicide bombings, Irish Republican Army and other terrorist attacks.

From 2001 to 2007, the complaint documented donations from the Rajaratnam Family Foundation to the TRO totaling "well over $5 million."

To lend credence to is contention that Rajaratnam clearly supported LTTE's campaign of terrorism, the complain cited allegations that letters introducing Rajaratnam was provided to LTTE founder and leader Velupillai Prabhakaran between 2002 and June 2003.

It said the letters of introduction to Prabhakaran, who was killed in 2009, were arranged by Karunakaran Kandasamy(Karuna), a TRO fundraiser and an LTTE operative who pled guilty in US courts to criminal charges of materially supporting LTTE in June 2009.

The complaint said that in letters to senior LTTE leaders in Sri Lanka, Karuna had described Rajaratnam as a wealthy Tamil supporter in the United States who was "among the people who provide financial support for our struggle for freedom," and as someone who "has been working actively on the forefront."

Rajaratnam has consistently denied any involved with the LTTE, which was also known for operating extortion networks in Europe and North America-in additional to fund-raising networks-where wealthy Tamils and even moderate income level Tamil expatriates, would have to contribute handsomely or even tithe a certain amount monthly to the LTTE, in return for an assurance that their families in Sri Lanka would not be harmed.

Pro-Eelam and pro-LTTE sources said that the law firm's acknowledgment that the suit was the result of a year-long investigation, was a clear indication that "it was government of Sri Lanka driven," and that Rajaratnam's arrest had provided "an opportune time to file it, when he was being portrayed as a major white-collar criminal."

Diplomatic sources disclosed that in 2007, when the TRO was being investigated by the Treasury Department, the Foreign Ministry had provided "an intelligence dossier" on Rajaratnam to the US authorities.

But some sources, trying to knock down the contention that the Sri Lankan government was gunning for Rajaratnam, pointed out his political contributions to the Hillary Clinton campaign, and then later the Barack Obama campaign.

Ironically, Schumer was the one who strongly recommended Preet Bharara to President Barack Obama to be appointed as US Attorney for New York, who signed off on the wire-taps and prosecution of Rajaratnam that led to his indictment and that of five others charged in the $20 million insider trading scheme.

Bharara who said, this case was the largest-ever over hedge fund insider trading, and where for the first time wiretaps were used to target insider trading, declared, "Greed is not good. This case should be a wake-up call for Wall Street."