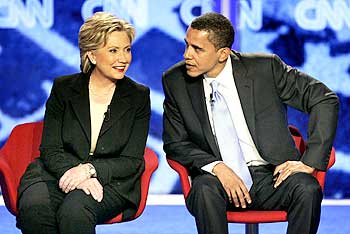 Clinton generated a 62 per cent favourable rating against her former rival Obama, who managed only 56 per cent.

Clinton's ratings have not changed much since Obama took office and nominated his former Democratic primary foe to be his Secretary of State, Fox News reports.

Obama's rating has plummeted steadily, down 22 points from his 78 per cent rating in January.

According to the report, Clinton's low profile has retained her favourable rating, while Obama has fielded criticism for his role in crafting a controversial health care reform legislation, his dealing with the Afghanistan war and his propping up of the auto industry.

The poll was taken between October 1 and 4, before Obama was awarded the Nobel Peace Prize for 2009.

The results were based on interviews with 1,013 adults and had a margin of error of four percentage points.
Source: ANI
Related News: Barack Obama, Hillary Clinton, Fox News, State, Afghanistan
Print this article