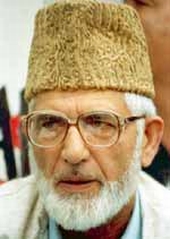 Rejecting Union Home Minister P Chidambaram's offer of talks, pro-Pakistani hardline Hurriyat leader Syed Ali Shah Geelani on Wednesday said that the solution to the Kashmir issue lies in tripartite talks, aimed at giving the right of self-determination to the people of Jammu and Kashmir.

"Talks have been held over 130 times between Kashmiris and New Delhi since March 23, 1952, but failed to achieve desired results. Instead of repeating the exercise, the Centre should look into the reasons as to why these talks failed," Syed Ali Shah Geelani said in Srinagar.

Commenting on the statement by Chidambaram that the Centre is ready for talks with all shades of political opinion in the state, the hardline separatist leader said, "There is nothing new in the offer of talks."

"The statement of Chidambaram is meaningless unless India publicly admits the disputed nature of Kashmir and agrees on the tripartite talks aimed at giving right of self-determination to the people of Jammu and Kashmir," said 80-year-old Geelani, who is under house arrest at his Hyderpora residence.

Geelani, who was briefly released from house arrest on Tuesday to allow him to undergo medical check-up in Delhi, said that there is a need for complete withdrawal of troops, revoke certain laws and release political prisoners to create a conducive atmosphere for talks.

"While on the one hand, India is expressing its willingness to engage all shades of political opinions, on the other, it continues to claim Kashmir as its integral part. In such a situation, how could the talks prove fruitful," Geealni asked.

However, he said that the talks should include all the three parties -- India, Pakistan and Kashmiris -- and should aim at finalising modalities to implement United Nations resolutions guaranteeing the right of self-determination to the people of Jammu and Kashmir.

'Working for an acceptable solution in J&K'