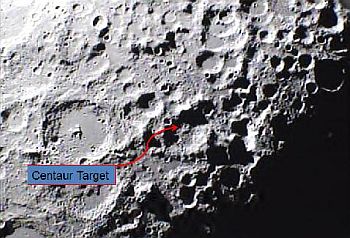 NASA's much-anticipated 'moon bombing' mission, in which it sent the LCROSS spacecraft to the moon to strike a crater in order to collect frozen water, may have literally hit a 'dry hole', as there were no billowing plumes of dust and ice visible after the impact.

According to a report in National Geographic News, NASA's Lunar Crater Observation and Sensing Satellite mission sent two spacecraft 'bombing' into the moon on October 9.

The craft successfully struck their target, a crater thought to harbour frozen water.

But, the much-hyped moon show that had been expected to accompany the impact, however, turned out to be a flop, as no billowing plumes of dust and ice were visible through backyard telescopes or on NASA TV.

The low-impact collision had one NASA expert musing that LCROSS may have struck a 'dry hole'.

At 7:31 am ET on October 9, a 2.2-ton empty rocket shot from the LCROSS probe hit the crater Cabeus A on the moon's South Pole.

Four minutes later, LCROSS performed its own kamikaze dive, which was the final act in its mission to detect evidence of water ice in the moon's shadowed craters.

Whether or not sky-watchers could see the LCROSS crashes, NASA insists they happened.

"I can certainly report that there was an impact," said LCROSS principal investigator Anthony Colaprete. "We saw the impact and we saw the crater," he added.

When the rocket crashed into the moon, though, cameras on LCROSS registered no discernable change in the crater -- at least to the untrained eye.

'It was hard to tell what we saw there,' said Michael Bicay, science director at NASA Ames Research Centre in California, during live coverage on NASA TV.

A closer inspection of LCROSS impact images, though, has revealed a small white speck that scientists think is the debris thrown up by the first crash, but it will take time for scientists to determine whether it is evidence of water on the moon, according to NASA.

'I am not going to say anything about water or no water, but we got the data that we need to address the question,' LCROSS principal investigator Colaprete said.

For many amateur astronomers who got up early to watch the crashes through telescopes or on NASA TV, the crashes were a bit anticlimactic.

'We had telescopes (as wide as) 32 inches, and nothing was seen,' said Siegfried Jachmann, vice president of the Salt Lake Astronomical Society in Utah.

Scientists said that it could be days before data transmitted by LCROSS are fully analysed.

Moon water may be 'harvested' for Mars missions