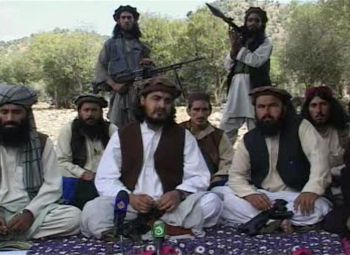 Saturday's audacious attack by Taliban militants in Rawalpindi has shocked the Pakistani establishment and society.

Experts believe that the recent wave of violence in the urban areas of Pakistan is a retaliation to the US drone attacks in the tribal areas of Af-Pak region that have so far killed many high-profile Taliban leaders including Baitullah Mehsud, the former chief of Tehrik-e-Taliban Pakistan, Qari Tahir Jan, the head of Uzbek militants and Abu Laith al Libi, a senior military commander of the Al Qaeda.

Talking to rediff.com, Syed Saleem Shahzad, Pakistan's bureau chief of Asia Times Online, said, "The current wave of suicide attacks is a retaliation to the growing US drone attacks in the Federally Administered Tribal Areas, and people will see more and more attacks in coming days. Especially the recent appearance of (new Taliban chief) Hakimullah Mehsud before the media has encouraged Taliban enabling them to restore their activities once again."

"The Taliban had suicide bombers all across the country, but the death of Baitullah followed by rumors about the killing of Hakimullah had discouraged them. As the TTP leaders emerged, the Taliban once again came to action and attacked government installations," Saleem said.

According to analysts, the TTP has not only speeded up its retaliatory attacks but has also tried to divert the attention of the government from the possible military offensive in South Waziristan Agency.

The recent interview of Hakimullah, the head of TTP, has revitalised the Taliban, which has launched a number of suicide attacks recently -- this week the Taliban struck the World Food Program office in Islamabad, followed by a suicide blast in Peshawar that killed at least 50 people and wounded 148 others, and finally the attack on the general headquarters on Saturday has astonished many.

On October 4, Hakimullah had reportedly arranged a meeting with journalists and rejected the claims made by Pakistani government that he was dead. He also warned to avenge the drone attacks and the killing of ex-Taliban head and his brother Baitullah Mehsud.

Muhammad Rasool Dawar, a tribal journalist who was part of the delegation that met the TTP head, spoke to rediff.com.

"During our meeting with Hakimullah, he warned to avenge the killing of Baitullah Mehsud. He said that if the US drone attacks were not ended, the Taliban would strike government installations in the urban areas of the country. The Peshawar, Islamabad and GHQ attacks clearly show that the Taliban is acting according to their head's warning," he said.

During this meeting, Qari Zafar, the head of Lashkari Jhangvi and Qari Hussain, the ruthless commander known for training suicide bombers, were also present, Dawar said.

"Qari Hussain has trained a number of suicide bombers, while Qari Zafar has a strong network in the urban areas of the country. Such suicide attacks are due to the collaboration of these two commanders," he added.

Qari Zafar is allegedly involved in attacking the American consulate in Karachi. Zafar, who has a $5 million prize over his head, reportedly has a number of trained bombers ready for attacks especially in Punjab and Sindh.

Zafar is also reportedly close to Hakimullah, as both belong to LJ, a banned fanatic Deobandi outfit.

Some critics are of the view that the aim behind the recent attacks is to divert the attention of the government from a possible military operation in South Waziristan.

Dr Hasan Askari, Pakistani defense analyst told rediff.com: "The Taliban are trying to divert the attention of security forces from a military operation against them in South Waziristan. The militants are demonstrating their power to show the government that they can retaliate and will target the security forces in every part of the country."