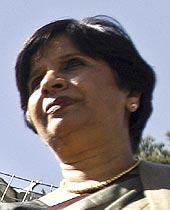 Hinting at Pakistani link to the Kabul embassy attack, India on Saturday said Afghanistan faces threat from terrorists and their "patrons residing across the border" and that the blast was handiwork of those who want to undermine Indo-Afghan friendship.

Foreign Secretary Nirupama Rao, who returned after a two-day visit to Kabul in the wake of Thursday's attack, made it clear that India will not be deterred by such acts as she reiterated the unwavering commitment to pursuing bilateral development partnership and assisting the people of Afghanistan in realising a democratic, peaceful and prosperous country.

"The attack was clearly the handiwork of those who are desperate to undermine Indo-Afghan friendship and do not believe in a strong, democratic and pluralistic Afghanistan," she said.

"The international community and indeed the people of Afghanistan face a clear danger from the perpetrators of such wanton acts of terrorism and their patrons residing across the border," Rao said, apparently hinting at Pakistan.

Afghanistan has already hinted at Pakistani linkage to the attack, with its foreign ministry saying the blast was "planned and implemented from outside the borders of Afghanistan".

Expressing her "deep concern and revulsion over the barbaric and cowardly attack", Rao said it was "so clearly aimed against the people of India and the people of Afghanistan and their abiding friendship."

The foreign secretary emphasised that the scourge of terrorism must be resolutely opposed, resisted and overcome through "undiluted commitment" and effort by the international community.

"They were unanimous in their view that the attack was carried out by elements from outside Afghanistan seeking to damage the excellent relations that exist between India and Afghanistan," a statement by the ministry of external affairs said.

Afghan leaders assured her that the Government of Afghanistan would do all in its power to expeditiously investigate the dastardly attack and bring to justice the perpetrators and those behind this attack, she said.

The foreign secretary extended her heartfelt condolences to the families of the Afghan nationals who lost their lives in this "cowardly" attack, particularly to the families of the two Afghan security personnel who died during the attack and whose presence of mind and alertness prevented what could have been a far greater tragedy.