News
Business
Movies
Sports
Cricket
Get Ahead
Money Tips
Shopping
Sign in  |  Create a Rediffmail account
Rediff.com  » News » 'If Pak doesn't want US help, we have other options'

'If Pak doesn't want US help, we have other options' 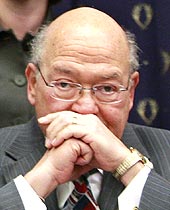 Congressman Gary Ackerman, New York Democrat, and a senior member of the House Foreign Affairs Committee, who last week slammed the Congressional passage of the massive economic and military largesse to Pakistan to the tune of $1.5 billion annually over five years, as the House dutifully fell in line with the Kerry-Lugar bill passed by the Senate last week tripling the aid to Islamabad, has denounced the Pakistani military's hostility to this aid because it contains some conditions regarding civilian control of the military and that the security component that it should be used exclusively for counter-insurgency and counter-terrorism.

The bill was pushed forcefully by the Obama administration sans any tough conditionalities save for some symbolic language without any teeth and much of the provisions contained in the original House bill introduced by Congressman Howard Berman, California Democrat and chairman of the House Foreign Affairs Committee were watered down to the extent that it was a veritable clone of the Senate legislation authored by Senators John F Kerry, Massachusetts Democrat and chairman of the Foreign Relations Committee and the ranking Republican Richard Lugar of Indiana.

Ackerman, former co-chair of the Congressional Caucus on India and Indian Americans, and chairman of the House Foreign Affairs Subcommittee on South Asia, said, "I've noted with concern the recent debate in Pakistan concerning the legislation recently passed by the US Congress to strengthen our partnership with Pakistan and to aid that country with some of its most pressing domestic and security concerns."

"As I said during debate on the legislation in the House of Representatives, I am skeptical about whether this assistance bill truly represents a meeting of the minds between ourselves and the people and the government of Pakistan."

Ackerman said, "Frankly, I doubt that our money can buy us much good will. Nevertheless, recognising the vital US interests at stake in South Asia in the fight against extremism and terrorism, I felt the Kerry-Lugar bill, for all its flaws, was absolutely necessary."

"But we cannot build a partnership by ourselves. It just can't be done," he asserted. "If the people of Pakistan really don't want our assistance; if they don't want to be our partner in establishing a truly secure and harmonious region; if, after so much effort and sacrifice by our two countries working together, they still don't even believe that we wish them well -- and, worse, are prepared to say so only days after the United States Congress made an unprecedented commitment of long-term assistance -- then I suppose we need to face the truth sooner than later."

Ackerman said that he "had concerns about the wisdom of the Kerry-Lugar bill before it passed. The recent debate in Pakistan has only increased my trepidation."

Thus, he reiterated that "if Pakistan doesn't want us as a partner, that's up to them. But should they take such a decision, they should do so knowing full well that our military assistance, advanced technology and intelligence cooperation are not gifts, but the specific consequences of our cooperation."

"They should likewise, be aware that these things are not reserved for them and that American interests in South Asia are not limited to just Pakistan," he said, and added, "We don't sell F-16s and Harpoon missiles to just anyone."

Ackerman acknowledged, "Pakistan is a sovereign state. I respect that and I want them to be our partner as an equal. But I have no interest in a partnership that exists just in name, or is mostly characterised by suspicion, resentment and political manipulation."

"In the end," he said, "Pakistan, like ourselves, will have to make some hard choices about where their interests really lie."

The Pakistani military had expressed 'serious concerns' over some of the provisions of the Kerry-Lugar bill, saying it impacted 'national security' and that the strings attached undermined the nation's sovereignty.

After a meeting of the Corps Commanders at the Army headquarters in  Rawalpindi,  presided over by Pakistan Army Chief General Ashfaq Pervez Kayani, a statement released said, "The forum expressed serious concerns regarding clauses impacting on national security."

Senator John F Kerry, Massachusetts Democrat, chairman of the powerful Senate Foreign Relations Committee, and co-author of the aid bill, after a meeting with visiting Pakistani Foreign Minister Shah Mahmood Qureshi said, "There is no conditionality whatsoever in the legislation with respect to civilian assistance and the economic assistance that is provided. No conditionality."

He bemoaned that "it is unfortunate the bill has been characterised in some quarters in ways that are not accurate."

Kerry said, "This bill should be seen as a real sign of friendship of the American people towards people of Pakistan, not towards the government specifically."

The lawmaker, who only a day before had expressed concern over possible Pakistan's Inter-Services Intelligence links with the Taliban and the Al Qaeda, said, "I want to emphasize again, there is no conditions attached to $7.5 billion in non-military aid."

Kerry said the provisions were "simply to make sure that the money is spent in the way that the American people sent it to Pakistan."

With regard to the military aid, obviously to placate the concerns of the powerful Pakistani army, which seemed to be asserting its authority and once again calling the shots, he said defensively, "The conditions on military aid do not require anything on Pakistan that is not already stated policy of the government and the opposition party. It is already agreed upon."

"There is absolutely nothing on this bill related to private security firms, drone attacks, or host of other issues that are being tangled together by the press. There is nothing in this bill that impinges on Pakistani sovereignty," he reiterated.

Apparently, what has raised the ire of the Pakistani military is that one clause in the bill calls on the US president to provide "an assessment of the extent to which the government of Pakistan exercises effective civilian control of the military, including a description of the extent to which civilian executive leaders and parliament exercise oversight and approval of military budgets, the chain of command, the process of promotion for senior military leaders, civilian involvement in strategic guidance and planning and military involvement in civil administration."

Last week, Ackerman taking to the floor before the House passed the bicameral legislation on a voice vote, commended Berman for his "strong efforts, particularly on the bill that we adopted in the House in July."

But he lamented, "The bill before us today had to satisfy other parties and is, in my view a lesser product for it."

The original Berman bill had specifically contained provisions that would hold Pakistan responsible if terrorism was perpetrated from its territory against India and also called for tough nonproliferation standards which demanded the interrogation of Pakistan's nuclear weapons technology black-marketer A Q Khan and stringent accountability of the US assistance to preclude it from being diverted from counter-insurgency and counter-terrorism to an arsenal to counter India.

Ackerman asked, "The fundamental question this legislation attempts to answer is, how can we best ensure the full cooperation of the government and people of Pakistan in our struggle against the Al Qaeda, the Taliban, and other sources of violence, terror and regional instability?"

He said that in the original House text authored by Berman, "The answer to this question was to propose a long-term partnership, one in which both sides had both interests and responsibilities; a partnership of equals who were expected to constantly, and appropriately, judge whether or not the relationship was succeeding."

But Ackerman complained that "the compromise bill before us today, is not a blueprint for partnership; it is a recipe for disappointment, followed by disillusionment."

"Pakistan is too big and too complex to be a proper subject for the Senate's preferred Pygmalion-like approach," he said, and argued, "Even if Pakistan sought such a relationship -- which they definitely do not -- Pakistan is simply beyond our shaping."

Ackerman said, "Pakistan's interests and our own are not very closely aligned. We see India as a major ally. They see India as unalterably rapacious and inherently dangerous. We see the Afghan Taliban as a wicked, oppressive and violent group intent on returning Afghanistan to primitive theocratic darkness. They see is as a useful insurance policy."

He continued, "We see Pakistan's ongoing relationship with radical Islamist terrorist groups as utterly illegitimate. They see these groups as both fundamentally just and as essential leverage. We see the nonproliferation of weapons of mass destruction as a fundamental obligation upon all civilized states. They see it as an unwarranted foreign imposition and, potentially, a violation of their rights."

"And the list of contradictions could go on across a range of subjects from madrassas to arms sales, from state enterprise corruption to feudal land reforms," he added.

Pakistan is a threat to the world, says Hillary