NASA 'bombs' the moon in search of water 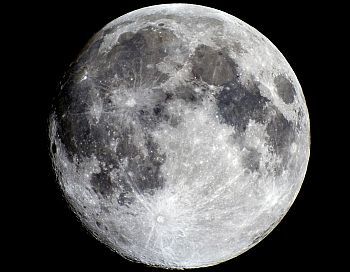 Two weeks after ISRO and NASA announced discovery of evidence of water on moon, two US spacecraft bombed the surface of the moon on Friday in a search for hidden ice and scientists were looking for conclusive proof about presence or absence of water.

US space agency NASA's Lunar Crater Observation and Sensing Satellite (LCROSS) crashed into the Cabeus crater floor near the moon's south pole at 1130 GMT (1700 IST) around 9,000 km per hour, followed four minutes later by a shepherding spacecraft equipped with cameras to record the impact.

The crash blasted a plume of rock and dust into space as Telescopes on Earth and instruments on the probe itself scoured the huge impact cloud to see if there is any water or ice spraying up. The planned live photos of the crash could not be seen even though NASA said all instruments were in order.

NASA scientists were however cautious over confirming the presence of water on moon.

"We don't anticipate anything about presence or absence of water immediately. It's going to take us some time," cautioned Anthony Colaprete, project scientist and principal investigator for the 79-million-dollar LCROSS mission.

Just a couple of weeks ago, India's maiden unmanned lunar mission Chandrayaan confirmed the existence of water in the region -- subsequently confirmed by data from the Lunar Reconnaissance Orbiter, the vessel that LCROSS hitched a ride into space alongside. Their findings showed that small amounts of water might be chemically bound up with the Moon's soil.

"The LCROSS science team is making their preliminary assessment of approximately four minutes of data collected from the LCROSS Spacecraft. Observatories involved in the LCROSS Observation Campaign are reporting in," the mission website said after the impact.

Colaprete said it would take several days for analysts to evaluate the data and several weeks to determine whether and how much hydrogen-bearing compounds were found.

According to scientists, "If ice is present in the permanently shaded lunar craters of the Moon then it could potentially provide a water source for the eventual establishment of a manned base on the Moon."

Finding water on Earth's natural satellite would be a major breakthrough in space exploration and pave the way toward future lunar bases for drinking water or fuel, or even man living on another planet.

This could be the place that we could go to mine water for a permanent lunar base, Scientists said.

The site of the impact on Friday is a 100-km-wide hole, which lies just a short distance from the Shackleton crater -- the proposed location for Nasa's manned lunar base, which it hopes to have completed by 2024.

Discovering a potential water supply has obvious benefits for that scheme, not least providing astronauts with a potential reservoir that they can tap into rather than rely on shipments from Earth.

The controversial mission has raised questions whether the natural forces should be interfered with. But Dr Vincent Eke, from the Institute for Computational Cosmology at the University of Durham, said the impact of the blast will simply create one more dimple on the moonscape.

"The cratered surface of the Moon shows it has a history of violent collisions with asteroids and comets," he said.