News
Business
Movies
Sports
Cricket
Get Ahead
Money Tips
Shopping
Sign in  |  Create a Rediffmail account
Rediff.com  » News » 'It would have been difficult to pursue research had I remained in India' 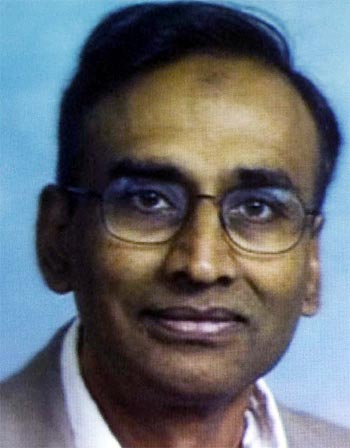 Venkatraman Ramakrishnan, who was named for the 2009 Nobel Prize in Chemistry this week, has been building towards this moment from childhood on.

His passion for science and research has been so consuming that he gladly took a massive pay cut to move from the all-paid-for lab at the University of Utah to comparatively tiny quarters at the MRC Laboratory of Molecular Biology in Cambridge, England, simply so he could pursue his dream.

'Venki cared more about the science,' remarked Dana Carroll, professor and former chair of biochemistry at the University of Utah where Venkatraman's prize-winning work began between 1995 and 1999.

Born in Chidambaram, Tamil Nadu, to scientist parents C B Ramakrishnan and Rajalakshmi, 'Venki' moved to the United States in the early 1970s to earn a PhD in physics. Since then the scientist, who is a United States citizen, has in a career studded with high honours pushed the frontiers of knowledge back with an almost messianic zeal.

It's all about loving research enough to make it your life mission, the newly-minted Nobel Laureate tells rediff.com's Suman Guha Mozumder:

What is the one aspect of your life and work that earned you the Nobel Prize?

I do not think I can answer that in one line. There are so many factors, so many developments, experiences, you know, that all come together at a time like this.

Soon after you were named for the Nobel, you said you were indebted to others for the work that you have done. Could you name these people?

I had great teachers in high school and the universities, and I had Professor Peter Moore who was my post-doctorate mentor at Yale. He was the person who introduced me to the ribosome.

If I really have to mention one single person, it would be Peter Moore at Yale.

Even during my undergraduate studies in India, I had a number of excellent teachers in my high school. There was P C Patel, who was my mathematics and physics teacher, and he was one among a number of excellent teachers during my undergraduate and graduate studies in India. There are too many to name, but certainly they all had a hand in preparing me for this moment.

How about Harry Noller, whose earlier work confirmed that the key elements of ribosome are made of RNA?

Yes, Harry Noller is a great ribosome scientist. He influenced many people indirectly, but I did not work for him.

How does your work on ribosomes translate into actual practice? How will it open up new areas in medical science, and aid in improving the health of mankind?

Well, if they are able to design new antibiotics based on ribosome structure, that would be very valuable (to fight) infectious diseases. I think a fundamental understanding of biology, that impacts in so many indirect ways is important.

I think you have to realise that if you improve fundamental knowledge, then indirectly you create all sorts of technology. Already, for instance, people are using these structures for new types of proteins.

Your peers say you put research ahead of all other priorities. Where did this passion come from?

I have been interested in science since I was 15. My parents were scientists too. So perhaps I grew up in an atmosphere of science -- maybe that is the reason.

What has changed in the years since your post-doctoral work that made it possible to expose the structure of the ribosome?

One of the big things was the development of technology -- like powerful X-rays, synchrotron X-ray detectors, faster computers, better computer graphics.

How much credit would you give to India and your background there for achieving what you have?

I think it would have been difficult to pursue my research had I remained in India, because of the lack of synchrotrons (which produce huge amounts of X-rays, allowing for X-ray photography to be done using small amounts of crystallised proteins). But having said that, I think the research situation in India has improved tremendously in the last 20 years.

I think there are not many problems now in terms of research being done in India -- it is only a matter of people wanting to do it. Also, there is now quite a lot of money for research in India. Of course there is need for more, and it should be more widespread -- that is, directed towards basic science.

Are you saying that since you left India, things have improved for researchers in your field?

Every person of Indian origin who has won a Nobel in science has done his work outside the country. So what ails India?

I do not think this has to do with facilities. It has to do with supporting basic science; broadly, educating people well in undergraduate studies and having a culture of respect for science.

If we do not change that attitude, then it is not going to produce great science.

If all bright people go for medical schools, engineering or management studies, then where are the bright people left to do science? So there is a need for cultural change.

Do you see, among the talented people still working in India, any potential Nobel winners?

I only know my own field, and cannot possibly comment in general. I sometimes hear about C N R Rao for instance (as a potential Nobel candidate). But I do not know the field he works in (solid state and structural chemistry).

Photograph: Reuters. Also read what his father said about his remarkable son; why a friend at the Indian Institute of Science thinks he is a great scientist; what his colleagues in the US say; how India missed another Nobel Prize this year; other Indian Nobel Prize winners.
Related News: India, MRC Laboratory of Molecular Biology, University of Utah, Peter Moore, Venkatraman Ramakrishnan
Print this article