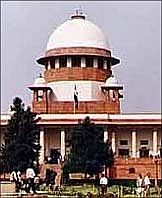 The Supreme Court on Mondaycame down heavily on the Mayawati government of Uttar Pradesh for constructing memorials despite its order and warned the state that it cannot play politics as it does with other parties.

"You don't play politics as you do it with other political parties in the assembly," a bench of justices B N Agrawal and Aftab Alam sternly told senior counsel Harish Salve appearing for the state.

"We have read with deep pain your affidavit and the undertaking made by you was lacking in sincerity. It was just an eyewash," the bench observed.

The bench said that prudence demand that if there was any such confusions, it was the duty of the state to approach the court and seek necessary clarifications.

The apex court passed the observation while dealing with the validity of the Rs 2,600 crore memorial structure being constructed for Bahujan Samaj Party founder Kanshi Ram and others Dalit leaders in the heart of Lucknow city.

It is alleged that despite giving an undertaking to the apex court on September 8, the Uttar Pradesh government had gone ahead with the constructions in gross violation of the undertaking thus committing contempt of the apex court.

Varun to promise SC he won't be reckless