News
Business
Movies
Sports
Cricket
Get Ahead
Money Tips
Shopping
Sign in  |  Create a Rediffmail account
Rediff.com  » News » Karkare and others did not get backup for 40 minutes: Kavita

Karkare and others did not get backup for 40 minutes: Kavita 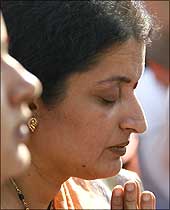 Kavita Karkare, the wife of former Maharashtra Anti Terrorism Squad chief Hemant Karkare, on Wednesday has questioned the state government as to why her husband and two other senior police officials, who were killed on November 26 last year, did not get reinforcements on time.

This is for the first time the slain officer's family has confirmed that he did not get the backup when required.

Karkare, along with late additional commissioner of police Ashok Kamte and late inspector Vijay Salaskar, was killed by terrorists near Cama Hospital at Chhatrapati Shivaji Terminus during the Mumbai siege.

Speaking to the media, Kavita said, "I just didn't know anything in the initial six months; politicians, the media and others came to see me, but I was not aware of what exactly was going on. Nobody has ever told me what exactly had happened on that day. No senior officers have told me about what had happened with my husband. I have just gathered information from the media or read in magazines and newspapers. Till date, I don't know the exact facts about that day."

"But when politicians raised questions saying he (Karkare) had acted in very hasty manner and had gone for the operation blindly, we started to gather facts about the incident. We came to know that Kamte, Karkare and Salaskar had planned a strategy at Cama hospital for 40 minutes. They had asked for help, but couldn't get any in those 40 minutes. Why did they not get help for 40 minutes? Nobody has given me the answer to this question," she added.

Kavita revealed that some police officials had even told her that she might never get to know what exactly had happened with her husband on the fateful day.

She also alleged that Karkare had been left injured and unattended for over 40 minutes and was not taken to the hospital on time.

"When these people (other officers) were on Cama Lane for 40 minutes, why were these three men not given any help? And, why were their bodies not picked up for about 40 minutes after the incident?" Kavita asked.

"Today, they are spending millions of rupees to preserve the bodies of the nine militants who launched the attack, just to show at the international level that we have humanity. But the bodies of these martyrs were lying at the spot as it is. What's going in our country? And when will there be a change?" she added.

Last week, Kavita had also alleged that her husband's bulletproof jacket was missing.

"After six months of the incident it struck me that his jacket was not on his body and it was missing. But I was not in my senses to file an RTI application. Two months ago, after I filed the RTI plea, I came to know that the jacket was actually missing," Kavita said.

Buy To the Last Bullet at Rediff Books