News
Business
Movies
Sports
Cricket
Get Ahead
Money Tips
Shopping
Sign in  |  Create a Rediffmail account
Rediff.com  » News » Will apologise to House, not to Azmi: MNS

Will apologise to House, not to Azmi: MNS 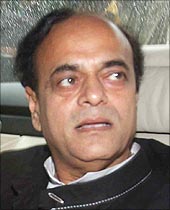 Raj Thackeray-led Maharashtra Navnirman Sena, whose members assaulted Samajwadi Party legislator Abu Asim Azmi in the Maharashtra assembly, on Wednesday said they would apologise to the House for their action but not to the Member of Legislative assembly.

"We will apologise in the assembly as it was not our intention to malign the image of the House. However, there is no question of apologising to Azmi," MNS leader Atul Sarpotdar said.

"The whole controversy started because of one person - Abu Asim Azmi. It was not our intention to lower the dignity of the House. What happened was a spontaneous reaction by our MLAs," Sarpotdar said.

Raj Thackeray had issued a statement, asking all MLAs in the assembly to take oath in Marathi, but Azmi deliberately chose to take the oath in Hindi, Sarpotdar alleged.

"MNS group leader in assembly, Bala Nandgaonkar, will speak to Raj Thackeray today on the issue of tendering an apology for Monday's incident and would, during the course of the day, apologise to the House," Sarpotdar said.